Home » NEWS » Flyover construction to begin within this fiscal year

Flyover construction to begin within this fiscal year 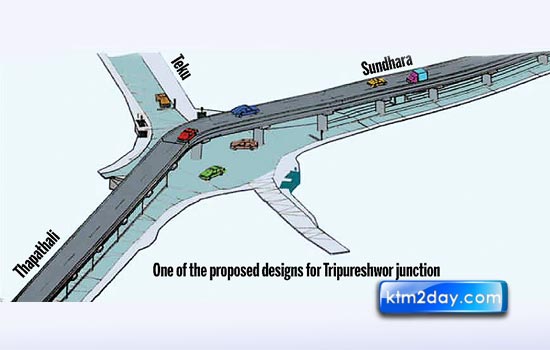 The Ministry of Physical Planning and Works has said the construction of underpasses or flyovers planned for Kathmandu’s five busiest junctions will begin within the current fiscal year. At present, the government preparing final designs.

Kalimati, Tripureshwor, Thapathali, New Baneshwor and Old Baneshwor junctions have been selected for the construction of grade-separated underpasses/flyovers. These structures are aimed at reducing traffic congestion for at least next 20 years.

“We are awaiting the detailed design to start construction within the current fiscal year,” said Tulasi Prasad Sitaula, secretary at the ministry. He added that the construction would be carried out using government resources.

The actual cost will be ascertained after finalising the detailed design, type of structures to be built and detailed project report, according to the ministry.

The Bridge Project under the Department of Roads is undertaking work related to the proposed underpasses/flyovers by hiring a consultant—a joint venture between Salt Test and Abhiyan Consulting. The consultant had proposed two to five options for each junction.

The Bridge Project has also asked the Central Regional Road Directorate, Kathmandu, to accommodate the grade-separated intersection plan in its 10-lane road improvement work in the Maitighar-Tinkune section, as the New Baneshwor junction falls within this section.

Grade separation is a method that is adopted to improve traffic flow at busy junctions by constructing tunnels, ramps, underpass roads or flyovers.

He said the best applicable designs for each junction would be approved after needful modifications by an international expert.

The consultant is all set to hire a Canada-based Bangladeshi expert for the evaluation of the designs. The Bridge Project has also said that it will consult with stakeholders, including ministries concerned, traffic police, Kathmandu Metropolitan City, security agencies and transport entrepreneurs, before finalising the designs.

Officials at the department said the construction of these two- to four-lane underpasses/flyovers was expected to complete within five years at most.

Meanwhile, the department is also considering amending plans for Kalimati and Tripureshwor junctions for lack of spaces, according to an official at the department. “According to studies, several houses are required to be dismantled at Kalimati Chowk and King Tribhuwan’s statue at Tripureshwor should be removed as per the existing plans,” the official added. (Source:ekantipur)