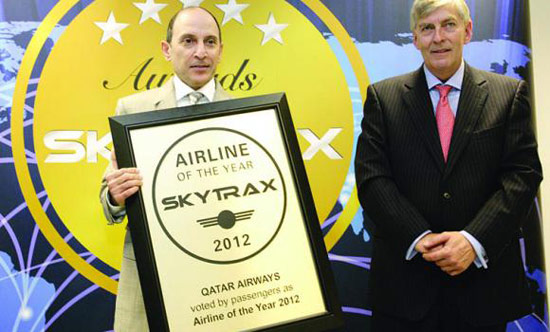 The winners were announced at an awards ceremony attended by leading figures from the global aviation industry at the Farnborough Air Show, the world’s largest aerospace event taking place in the UK this week. The Skytrax awards, conducted by the global aviation research organization, polled over 18 million business and leisure air travelers from more than 100 countries.

Qatar Airways’ CEO Akbar Al-Baker hailed the achievements as “fantastic recognition” of all employees at Qatar Airways for the dedication and commitment to their job. Qatar Airways set out on a mission 15 years ago when we launched to be the world’s best airline and spread the airline’s quality brand to all corners of the world. The achievements further reflect the high standards that we set for ourselves and receiving the awards is fantastic recognition of the hard work and commitment of our staff across the world who help make Qatar Airways the success it is today.”

Skytrax CEO Edward Plaisted said: “To win the Airline of the Year award for a second successive year is a remarkable achievement for Qatar Airways, and a clear recognition of the continued efforts by Qatar Airways’ management and staff to be the world’s best airline.

Air travelers were surveyed during a 10-month period by telephone, questionnaires and online about their experiences with airlines on the ground and in the air. The survey covered more than 200 airlines, from the largest international airlines to smaller domestic carriers.