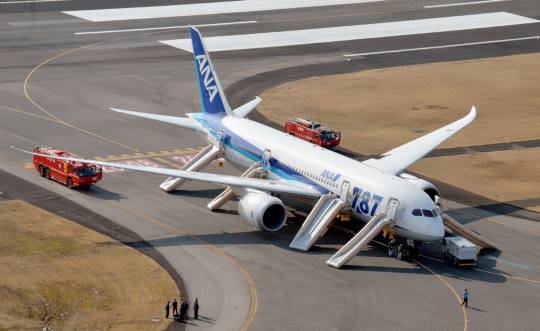 Japan’s two leading airlines grounded their fleets of Boeing 787s on Wednesday after one of the Dreamliner passenger jets made an emergency landing, the latest in a series of incidents to heighten safety concerns over a plane many see as the future of commercial aviation.

Wednesday’s incident, described by a transport ministry official as “highly serious” – language used in international safety circles as indicating there could have been an accident – is the latest in a line of mishaps – fuel leaks, a battery fire, wiring problem, brake computer glitch and cracked cockpit window – to hit the world’s first mainly carbon-composite airliner in recent days.

“I think you’re nearing the tipping point where they need to regard this as a serious crisis,” said Richard Aboulafia, a senior analyst with the Teal Group in Fairfax, Virginia. “This is going to change people’s perception of the aircraft if they don’t act quickly.”

ANA, which said the battery in the forward cargo hold was the same lithium-ion type as one involved in a fire on another Dreamliner at a U.S. airport last week, grounded all 17 of its 787s, and Japan Airlines Co suspended its 787 flights scheduled for Wednesday and Thursday.

The two airlines, which operate around half of the 50 Dreamliners delivered to date, said they would decide on Thursday whether to resume Dreamliner flights the following day.

The 787, which has a list price of $207 million, represents a leap in the way planes are designed and built, but the project has been plagued by cost overruns and years of delays. Some have suggested Boeing’s rush to get planes built after those delays resulted in the recent problems, a charge the company strenuously denies.

Both the U.S. Federal Aviation Administration (FAA) and the National Transportation Safety Board (NTSB) said they were monitoring the latest incident as part of a comprehensive review of the Dreamliner announced late last week.

ANA flight 692 left Yamaguchi in western Japan shortly after 8 a.m. local time (2300 GMT Tuesday) bound for Haneda Airport near Tokyo, a 65-minute flight. About 18 minutes into the flight, the plane descended and made an emergency landing 16 minutes later, according to flight-tracking website Flightaware.com.

At a news conference – where ANA’s vice-president Osamu Shinobe bowed deeply in apology – the carrier said a battery in the forward cargo hold triggered emergency warnings to the pilots, who decided on the emergency action. “There was a battery alert in the cockpit and there was an odd smell detected in the cockpit and cabin, and (the pilot) decided to make an emergency landing,” Shinobe said.

In a statement later, ANA said the main battery in the forward electrical equipment bay was discolored and there were signs of leakage.

Passengers leaving the flight told local TV there was an odor like burning plastic on the plane as soon as it took off. “There was a bad smell as soon as we started and before we made the emergency landing there was an announcement and the stewardess’ voice was shaking, so I thought this was serious,” one passenger told TBS TV.

Another man told a local broadcaster: “There was a strong, burning smell, but the smoke appeared after they opened the emergency doors, after we landed.”

Marc Birtel, a Boeing spokesman, told Reuters: “We’ve seen the reports, we’re aware of the events and are working with our customer.”

Robert Stallard, analyst at RBC Capital Markets, said lost revenue at the Japanese airlines could prompt compensation from Boeing. “What started as a series of relatively minor, isolated incidents now threatens to overhang Boeing until it can return confidence, and this looks to be a near-term challenge given the media’s draw to all things 787,” he said.

In Asia, only the Japanese and Air India have the Dreamliner in service, but other airlines are among those globally to have ordered around 850 of the new aircraft.

Australia’s Qantas Airways said its order for 15 Dreamliners remained on track, with its Jetstar subsidiary due to take delivery of the first of the aircraft in the second half of this year.

India’s regulator said it would wait for a safety report from Boeing, expected later on Wednesday, before deciding whether to ground the six Dreamliners operated by state-owned Air India. “We have formed a small team and are having discussions with Boeing as well as Air India, and working out the basic problems to the basic electrical systems, and then we’ll take a final call on this,” Arun Mishra, Director General of Civil Aviation told reporters.

United Airlines, the only U.S. carrier now flying the 787, said it was not taking any immediate action in response to the latest incident. “We are looking at what is happening with ANA and we will have more information tomorrow,” a spokeswoman said.

The Dreamliner’s problems echo those of rival Airbus, which a year ago survived a crisis of public confidence after a series of incidents with wing cracks on its A380, the world’s largest passenger jet. Those problems tested the manufacturer’s relations with airlines, but no plane orders were cancelled.

Shares in GS Yuasa Corp, a Japanese firm that makes batteries for the Dreamliner, fell 4.5 percent. The Kyoto-based firm said it was too early to comment on the situation.

The use of new battery technology is among the cost-saving features of the 787, which Boeing says burns 20 percent less fuel than rival jets using older technology.

Lithium-ion batteries can catch fire if they are overcharged, and once alight, they are difficult to put out as the chemicals produce oxygen, Boeing’s chief engineer for the 787, Mike Sinnett, told reporters last Wednesday. He said then that lithium-ion was not the only choice of battery, but “it was the right choice”.

Shares in other Dreamliner suppliers in Japan came under pressure, with Toray Industries Inc, which supplies carbon fiber used in the plane’s composites, also down 4.5 percent, and Fuji Heavy Industries, Mitsubishi Heavy Industries and IHI off 2.5-4 percent on a benchmark Nikkei that was 2.6 percent lower. ANA shares slipped 1.6 percent.

Japan’s transport minister on Tuesday acknowledged that passenger confidence in the Dreamliner was at stake, as both Japan and the United States have opened broad and open-ended investigations into the plane after the recent incidents.

The 787 is Boeing’s first new jet in more than a decade, and the company’s financial fortunes are largely tied to its success. The plane offers airlines unprecedented fuel economy, but the huge investment to develop it coupled with years of delay in delivery has caused headaches for customers, hurt Boeing financially, and created a delivery bottleneck.

Boeing has said it will at least break even on the cost of building the 1,100 new 787s it expects to deliver over the next decade. Some analysts, however, say Boeing may never make money from the plane, given its enormous development cost.

Any additional cost from fixing problems discovered by the string of recent incidents would affect those forecasts, and could hit Boeing’s bottom line more quickly if it has to stop delivering planes, analysts said.