Race 2 to be released in more than 50 countries 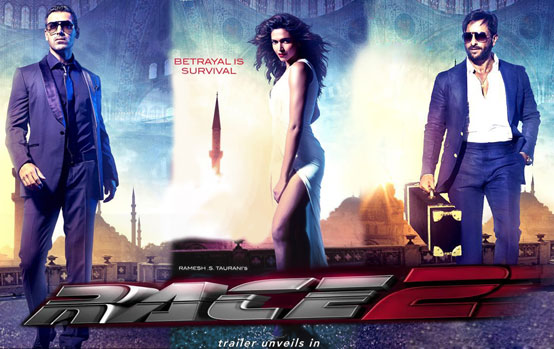 In an attempt to expand Bollywood’s fan base and cater to more viewers of Indian cinema, the makers of Race 2 will release the upcoming action film in new territories like Myanmar, Vietnam and Maldives.

After many years, a Hindi movie will see a simultaneous release in Morocco in 4 to 5 screens, including theatres in Casablanca and Marrakech. Newer territories like Myanmar, East Timor, Maldives and Vietnam (with as many as 7 screens) are also in our release plan.

The second instalment of director duo Abbas-Mustan’s 2008 hit by the same name is being co-produced by TIPS and UTV Motion Pictures.

Its worldwide release is scheduled for January 25. The film stars Saif Ali Khan and Anil Kapoor from the original, along with John Abraham, Deepika Padukone, Jacqueline Fernandez and Ameesha Patel.