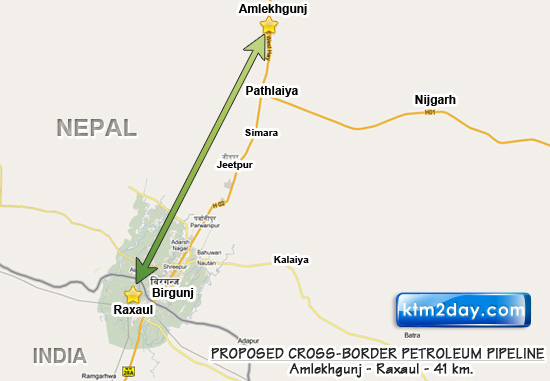 The government has formed yet another committee to speed up construction of much-delayed 41km Nepal-India cross border petroleum pipeline project.

At present, a committee led by the National Planning Commission (NPC) Vice Chairman Dipendra Bahadur Kshetry is studying the project. The new committee has been formed under the chairmanship of Lalmani Joshi, secretary of the Ministry of Commerce and Supplies (MoCS).

The new committee has been entrusted to recommend necessary ideas to the NPC on construction and operation modality, technical, resources among other issues to help the proposed project ahead without any obstruction, Kshetry said. “If the ideas submitted by the new committee are reasonable, we will approve the project.”

He informed that the NPC had also sought suggestion from the committee on whether the project could be developed with international resources. “The Indian Oil Corporation (IOC) has expressed its interest to invest in the project,” he said, adding that the project, which has been in limbo since a long time, needs a fast-track decision and that the ministry’s suggestion in that regard would be very helpful.

On January 3, the Cabinet agreed in principle to construct the petroleum pipeline project. Subsequently, the NPC formed a committee to look into the number of legal and technical complexities persisting on the execution of the project.
“The project needs to study minutely to ensure that no questions are raised later,” Kshetri added.

The project has been estimated to cost Rs 1.6 billion besides costs for the land acquisition. A pre-feasibility study in 2004 and a technical study in 2006 had declared the project economically viable, provided the pipeline is operated unhindered for 20 years.

The pipeline, if developed, is expected to save Rs 300-350 million annually in transportation costs alone for Nepal Oil Corporation (NOC) which currently spends around Rs 500 million annually to transport petroleum products from Raxaul, in India, to Amalekhgunj. The annual operation cost of the proposed pipeline is estimated at Rs 120 million.

The project is envisaged to reduce leakage and ensure supply cleaner and cheaper fuel. It could also bring relief to Nepali consumers from frequent shortages caused by strikes. A report of the High-Level Petroleum Reform Committee had also suggested immediate construction of the pipeline.

A joint-venture model with equity participation of the NOC and the IOC was planned when the government had approved the project in February 2010. But in March 2011, Nepal and India dropped the JV model and agreed a new modality, whereby the two countries would construct the pipeline separately on their respective territories, and it would then be linked after signing a bilateral pipeline treaty.