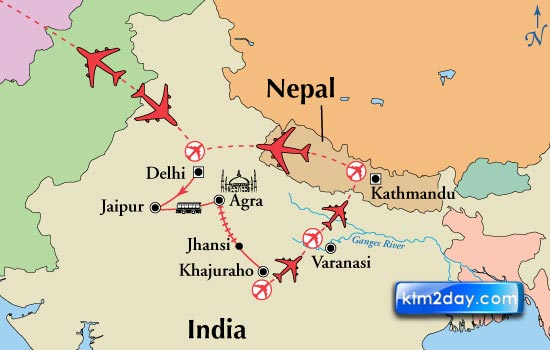 Nepal and India will be reviewing their airspace agreement to provide more cross-border entry and exit points for airlines that will be serving the proposed Second International Airport (SIA) in Bara, Nijgadh and the regional international airports in Bhairahawa and Pokhara.

The airspace agenda, which had been gathering dust for a long time, was endorsed during Indian Prime Minister Narendra Modi’s recent visit to Nepal.

The government has requested India to allow three more air entry points at Janakpur, Bhairahawa and Nepalgunj. The prime ministers of the two countries have directed the concerned authorities to meet within six months to resolve the issue.

A joint communiqué issued by the two sides at the end of the visit said, “The cross-border direct routes will facilitate flights between regional airports in Pokhara and Bhairahawa, and this will save time and money for air travellers and also improve air connectivity between India and Nepal.”

A technical committee comprising Indian and Nepali experts will be formed to study and formalize the airspace agenda, said officials of the Tourism and Civil Aviation Ministry.

Presently, the Simara route is the only route for aircraft flying into Nepal. It is used by almost all the airlines and has been suffering from air traffic congestion. Two other entry points, Kakkarbhitta and Nonim, have been specially designated for planes coming from Bhutan and China respectively.

“There is a dire need to develop more entry routes in order to reduce traffic congestion at the Simara point and facilitate cross-border aircraft movement to the proposed airports,” said Tri Ratna Manandhar, former director general of the Civil Aviation Authority of Nepal (Caan).

According to him, the Simara point will not be able to handle the increased air traffic even if one of the planned international airports were to come online.

As international airlines connecting Kathmandu use the Simara route which is the shortest, aircraft have to make their descent and ascent in Indian airspace during arrival and departure respectively.

As per the bilateral air service agreement between Nepal and India, aircraft entering Nepal are allowed to maintain an elevation of 21,000 ft.

The provision is practical for making a descent to Kathmandu’s Tribhuvan International Airport, but aircraft serving SIA will have to make a spiral descent, or circle the sky, to land at the airport from the given elevation.

“This requirement will not make the airport viable no matter how large it is,” said Manandhar. He added that the proposed entry and exit points in the eastern and western parts of Nepal would provide enough room for aircraft to ascend and descend in Nepali airspace.

On Sept 10, 2009, Nepali and Indian aviation authorities revised the air service agreement and signed a technical accord permitting Indian carriers to increase their weekly seat capacity to 30,000 from 6,000 over the two countries’ airspace.

Nepali carriers have been permitted to fly to 21 destinations in India as per the reviewed ASA. However, the Nepali authorities did not realize that it would require extra entry points.

The importance of air routes was realized when the plans of Nepali carriers to expand cross-border flights were thwarted by the absence of adequate entry points.

Nepali carrier Buddha Air had to abandon its plan to operate Pokhara-Bhairahawa-Lucknow flights due to the air route problem. It had been allowed to fly from Pokhara to Lucknow; but on the return flight, it had to enter Nepal through the Simara point which made the service economically unviable.

The last time Nepal opened additional air routes was on Nov 19, 2009 when the L626 was launched. This satellite navigation route linking New Delhi with Kathmandu through a flight path passing over Chitwan, Palpa, Surkhet and Mahendranagar was implemented after a seven-year endeavour.

The Indian government approved the L626 route as per the air service agreement signed between the two countries in September the same year.

The L626 route allows westbound aircraft to fly in Nepali skies for 52 minutes. International flights used to remain in Nepal’s airspace for around 20 minutes previously.