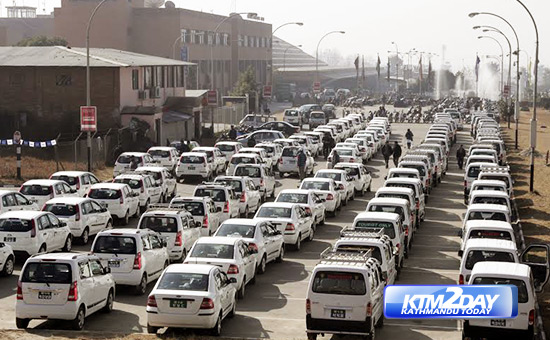 The government’s plan to put 1,850 new luxury cabs on the streets of the Kathmandu Valley has hit a snag due to trade restrictions at the Birgunj border point.

The Department of Transport Management has distributed 1,340 cab licences but only a few vehicles have been imported so far.

The scheme aims to offer value for money and a more comfortable ride to taxi passengers who have been forced to travel in dilapidated cabs.

Licences under this category too will be distributed through a lucky draw.

The Transport Management Office, Bagmati had received a phenomenal response from applicants wishing to acquire new taxi licences. The department had been inundated with 15,751 applications for 1,850 taxis. “Originally, the department had set a target to distribute the licences by last Dashain, but the April 25 earthquake delayed our plan,” said Rajesh Poudel, chief of the Small and Big Vehicles Division at the Transport Management Office, Bagmati. “Subsequently, the blockade affected our plan to import new taxis.”

The government had then planned to distribute the licences by mid-December last year, but it missed the deadline again. “The Ministry of Physical Infrastructure and Transport has set a provision that licence holders should complete the taxi registration process by mid-July,” Poudel said, adding that if they missed the time limit, the government would revoke their licences. The government has issued new taxi licences for the first time in 15 years. As per the department’s statistics, there are 5,650 taxis currently operating in the valley.

There were 7,500 taxis in Kathmandu in 2000, when the population of the valley was estimated to be 1.3 million, according to government figures. The population has swelled to an estimated 4 million presently.
Realizing the need to cater to growing demand, the government had decided to add 2,850 new taxis.

Besides the 1,850 new taxi licences allocated for entrepreneurs and the general public, 500 licences has been set aside for earthquake survivors and their families. Another 500 permits have been reserved for companies to operate deluxe and super deluxe taxis where transport companies can compete.