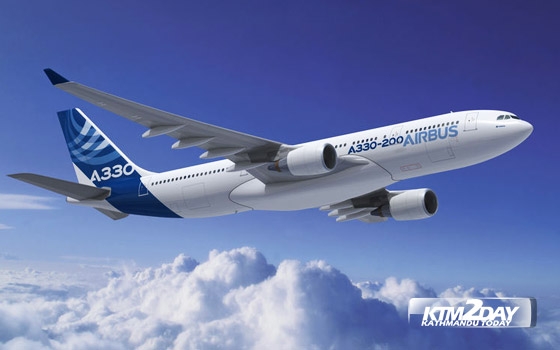 Under its fleet expansion plan, the national flag carrier will buy two wide-body and two narrow-body aircraft over the next two years. The first wide-body jet is scheduled to join its fleet next December, according to the strategy.

The second of the two wide-bodies is expected to be inducted into the fleet by February 2017. The corporation expects to spend Rs26 billion for the two wide-body aircraft. NAC has not confirmed the type of plane it will buy, but sources said it could be an Airbus A330 as NAC plans to have an all-Airbus fleet in the near future.

Likewise, NAC plans to procure the first of the two narrow-body aircraft by May 2017 and the second by July 2017. “After the first wide-body jets are inducted into the fleet, we will be connecting Australia, Japan and South Korea,” said NAC Managing Director Sugat Ratna Kansakar, speaking at the unveiling of the plan.

He added that flights to Saudi Arabia, Dammam, Colombo, Yangon and London would be started after the rest of the planes arrive.

“As the major challenge is arranging finance, we have conducted two rounds of meetings with the Finance Ministry,” he said, adding that the ministry was positive about providing the necessary money.

Last year, the national flag carrier purchased two Airbus A320-200 aircraft by borrowing Rs10 billion from the Employees Provident Fund, its first fleet expansion in 27 years. The corporation has planned a number of initiatives for its new jet procurement plan after the Finance Ministry asked it to do a complete overhaul of its management and operation to get the loan amid criticism over its performance and services.

Kansakar said that they would launch e-ticketing within six months and make a concrete plan to manage its human resources and develop their capacity.

“We will also be adopting a revenue accounting system and Nepal financial reporting system as per international standards,” he said. “Besides, a pilot shortage is another challenge that requires careful planning.”
However, the corporation has not proceeded with its much-talked about plan to hand over management as it has long been facing criticism for its failure to assure quality and efficiency.

According to NAC officials, 21 foreign firms including Lufthansa Consulting and Airbus have submitted letters of intent (LoI) to provide world class management consultancy services to NAC. The project has been put on hold due to the government’s unclear policy on funding, they said.

Presently, NAC holds a meagre 5.87 percent share of the market in the international segment.

The carrier serves seven international destinations, including three Indian cities, and plans to expand operations to four other destinations, namely Guangzhou, Dubai, Kolkata and Kunming, by the end of this fiscal year.