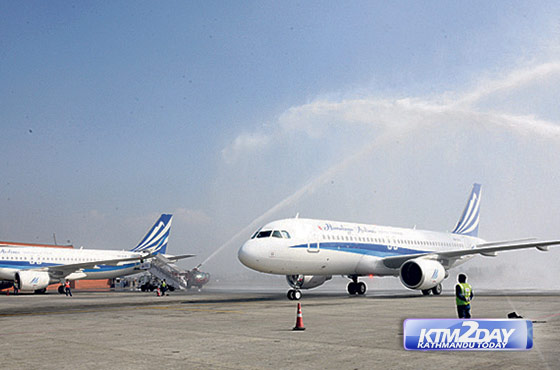 Himalaya Airlines, a Nepal-China joint venture carrier, has added a second Airbus 320-214 aircraft in its fleet.

The aircraft, with call-sign 9N-ALV, landed at the Tribhuvan International Airport (TIA) in Kathmandu on Tuesday. The aircraft was given a ceremonial water cannon salute as it touched down at the TIA, arriving from Hamburg, Germany.

Apple supplier Foxconn, others hit as India holds up imports…

Speaking on the occasion, Shrestha said that the arrival of the second Airbus 320 has made the Himalaya Airlines team highly inspired to work. “It enables us to bring new opportunities to connect Nepal directly with new destinations and contribute toward the economic development of the country. The arrival of the second aircraft in just one year of operation is definitely a milestone for Himalaya Airlines as well as for the Nepali aviation industry,” he added.

The aircraft has 158 seats configured to carry 150 passengers in Economy class seats and eight in Business class seats.

Himalaya Airlines started scheduled flights from May 31, with a direct flight to Doha of Qatar. It added its second destination Colombo, Sri Lanka, on October 1, 2016.

Apple supplier Foxconn, others hit as India holds up imports from China