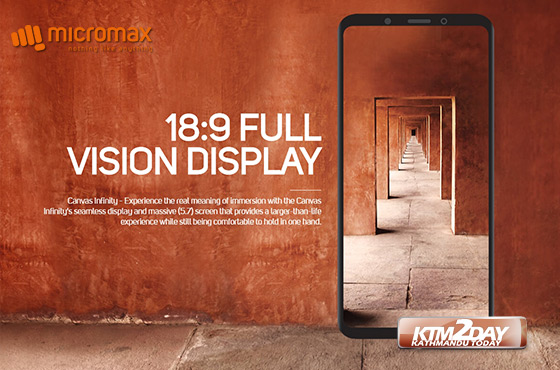 Micromax is one of the prominent Indian names in the mobile and smartphone industry, being popular for its budget friendly as well as premium state of the art phones, reads a press release. The Micromax Canvas 2 has sold over half a million devices globally and is looking to emulate that success via the launch of their most advanced smartphone yet, the Canvas Infinity.

The phone is powered by a Snapdragon quad-core processor and features 3 GB of RAM to ensure apps launch quickly and smoothly. With 32 GB of internal storage and the option of expanding storage by up to 128 GB via microSD card, the company is confident that users will never run out of storage space on the Canvas Infinity.

According to the company, users will be able to take beautiful photos using the high resolution 13 Megapixel (MP) camera on the rear. For selfies, the company has equipped the phone with a 16 MP front facing camera.

Users will be able to view their photos on a crisp 5.7 inch LCD multicolour display which has a resolution of 1440 by 720. While the Canvas Infinity comes with Android Nougat out of the box, the company is promising a software update to Android Oreo. The device has a powerful 2900mAh battery which allows users to use the phone without worrying about battery life, reads the press release.

Micromax is confident with their latest release and claims that the Canvas Infinity is easily one of the best mobile phones out in the market as it will not compromise on performance at any given point of time.

The phone is fitted with all the bells and whistles like a fingerprint sensor on the rear to quickly unlock the phone, accelerometer, proximity sensor, A-GPS, OTG support and Bluetooth. The Canvas Infinity is 4G ready.