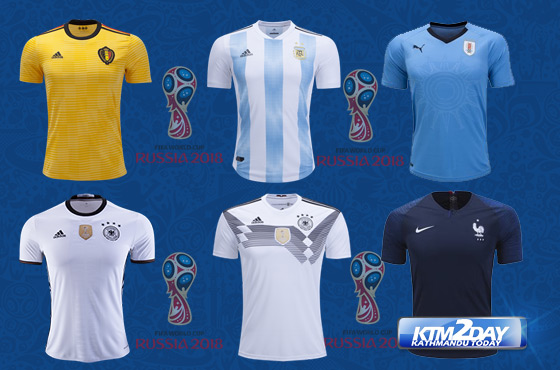 As the atmosphere leading up to the Fifa World Cup 2018 reaches fever pitch, sportswear retailers are laughing all the way to the bank as they rake in sales worth millions of rupees. And the demand for official jerseys of national teams participating the world’s largest football tournament which will kick off from June 14 in Russia continues to grow.

According to sportswear retailers, they expect business to accelerate further when the World Cup begins.

Nepali fans are buying such jerseys to display their support for a particular team while some buy it due to the low price. The price of World Cup jerseys start from Rs500 all the way to Rs1,550, depending on the quality.

Some of the best selling jerseys for Fifa World Cup 2018 are of Argentina, Brazil, Germany, Portugal, England, France and Spain.

While business has surged ahead of the World Cup for sportswear retailers, they claim that sales are decidedly lower than during the 2014 World Cup. According to retailers, shops can earn as much as Rs10.5 million from jersey sales along with accessories such as flags and footballs during the Fifa World Cup 2018.

Due to the rise of e-commerce sites and delivery facilities, brick and mortar shops are seeing less footfall in their shops compared to four years ago. “The presence of online shops was relatively weak in 2015,” said Prem Jung Chhetri, proprietor of a sportswear shop in Sundhara. “Even low priced jerseys do not attract customers.” Jersey shops have started decorating with flags of the countries participating in the Fifa World Cup 2018 in a bid to attract customers. He revealed that sales of jerseys taper off when the country is knocked out of the tournament.

Meanwhile, another shop owner based in CTC Mall, Milan Basnet said that the jersey business has been increasing in the last few days. Sportswear shops are offering jerseys for all ages and genders. Retailers say that the increased customs duty on the import of ready-made apparels has also played a role in making the jersey dearer in the market. Currently, sportswear shops are selling 50 to 100 pieces of jerseys per day and expect to sell more during the World Cup period. “The craze for jerseys will boom after a week as the World Cup approaches,” said Chhetri.

The jersey shop has also started decorating their shops with flags of countries participated in Fifa World Cup 2018.