Agni Group, the official dealter for Mahindra automobiles in Nepal has launched the new facelifted version of the XUV500. Calling it the ‘plush’ new XUV500, Mahindra is marketing the new SUV as a more comfortable and luxurious offering than its competition .

The Mahindra XUV500 facelift is more than just a mere cosmetic update. Changes to the SUV, apart from the noticeable front and rear nip-and-tucks, include leather upholstery on the inside, a new infotainment system with smartphone and smartwatch connectivity, more powerful diesel engine and new variant names. Mahindra wants the XUV500 to look more ‘plush’, which has led to a toning down of the aggressive lines of the SUV. It still does have tonnes of road presence though.

Changes at the front include the new headlights with the DRLs moved to the top, a new subtle (as compared to before) chrome grille and a slightly reworked bumper. Changes at the sides are limited to some chrome detailing on the doors and the new 18-inch alloy wheels. The rear has been majorly redesigned with triangular taillamp clusters and a redesigned tailgate. The dual exhausts, though, have been carried over unchanged.

The interior design of the dashboard has not changed, but the materials used all around have been upgraded to make it feel better. 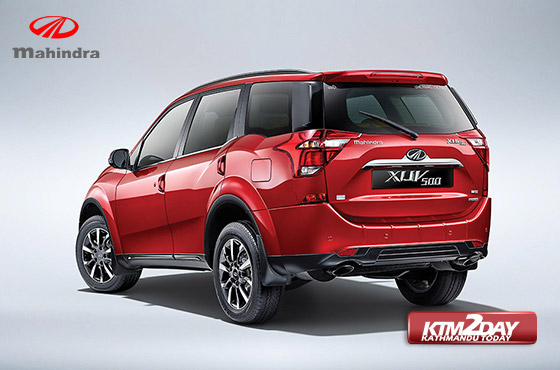 Mahindra’s 7-seater SUV continues to get fancy equipment like a sunroof, 6-way electrically adjustable driver’s seat, voice feedback, A/C vents on the pillars for the 2nd and 3rd row passengers, split- and flat-folding rear seats, tyre pressure monitor and others. The highlight of the new XUV500 is how you can check/control many of the functions of the XUV500 through its multimedia screen, or if you are a passenger, through the Blue Sense app for Android and iOS. The Blue Sense app is also available on a select range of smartwatches too.

While safety features like dual front airbags, ABS, ESP and all four disc brakes are offered as standard, the top-of-the-line W9 and W11 variants get six airbags, hill hold and hill descent control too.

The XUV500 “Plush” is currently available in four different variants and the pricing starts at Rs. 61,80,000.