Tesla has a new rival from Russia,the Kalashnikov CV-1 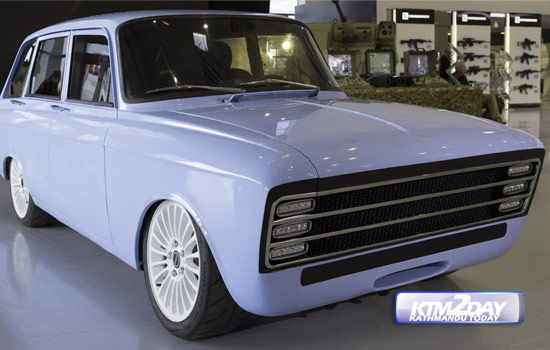 The Russian manufacturer of the infamous AK-47 assault rifle has unveiled a prototype vehicle that it claims can compete with Elon Musk’s Tesla range.

Kalashnikov Group presented the retro-style electric car at an exhibition of Russian defense and civilian products just outside Moscow on Thursday.

The powder-blue model is dubbed the CV-1. Kalashnikov said in a statement on its website that its boxy design is inspired by a Soviet hatchback car developed in the 1970s.

According to several media reports, the company told reporters attending the expo that the car featured technology that would “let us stand in the ranks of global electric car producers such as Tesla.”

The company’s website said the vehicle can travel 217 miles on a single charge and can reach 100 kilometers per hour (62 miles per hour) in six seconds.

Opinion on social media website Twitter was divided, with one poster asking Tesla’s Elon Musk for his thoughts.

As it is at the prototype stage, the vehicle’s price tag has not yet been estimated or disclosed.