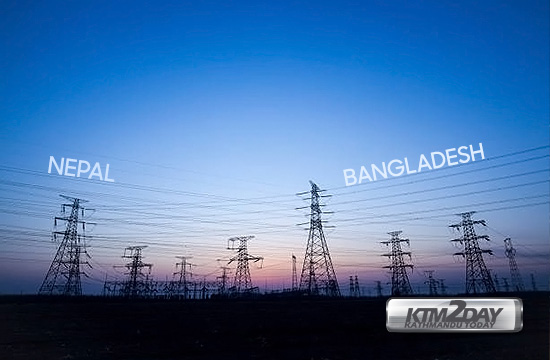 According to NEA Managing Director Kulman Ghising, the template of the MoU has been prepared after a couple of rounds of back and forth between the two organisations. “We are ready to sign the MoU within a few weeks,” said Ghising.

After signing the MoU with NVVN, the power utility will sign a separate MoU with Bangladesh Power Development Board (BPDB), a statutory body of the Bangladeshi government, which will import electricity from Nepal.

The NEA will then sign a power purchase agreement with Bangladesh to export electricity generated from Upper Arun and Dudhkoshi Storage hydropower projects. “Once the Bangladeshi government completes capacity booking, India will be ready to develop a transmission line in its territory through which the electricity will be exported to Bangladesh,” said Ghising.

As per the deal, the NEA will supply electricity generated by its two plants into the Indian grid and NVVN will transmit it to Bangladesh by imposing the wheeling charge. As Indian laws don’t allow power producers in Nepal to export electricity to third countries using Indian transmission lines, the modality will provide a way to trade electricity produced by hydropower projects in Nepal.

The arrangement will act as a guiding framework for Nepal to export surplus electricity to Bangladesh that Nepal is expected to produce in a few years.

Bangladesh promises to be a lucrative market for hydroelectricity produced in Nepal as it is an energy hungry nation and plans to import electricity from neighbouring countries to sustain the high economic growth rate that it has been achieving for the last few years.

The seasonal complementarities of demand and supply of electricity that exist in Nepal and Bangladesh will make electricity export highly viable, according to the NEA.

“The demand of electricity in Bangladesh is very high during the summer and demand goes down during winter,” said Ghising. “Similarly, our electricity generation is at peak during summer while it drops down significantly during the winter when the water discharge is low in the snow-fed rivers of Nepal where majority of the power plants are located.” Therefore, the pattern of electricity demand is a perfect match to supply pattern in Nepal, he added.

According to experts, the price of electricity in Bangladesh is good compared to Nepal and India which will make a large number of hydropower projects in Nepal financially viable. Likewise, the PPA signed with Bangladesh will be US dollar denominated, making the project more profitable when the greenback appreciates. Recently, Nepal and Bangladesh signed an energy cooperation agreement with the aim of exploring the possibilities of initiating electricity trade between the two countries.