Oneplus 7 design leaks in render, launching in May The OnePlus 7 rumor mill has started churning out leaks and renders once again. Ahead of the official launch, OnePlus 7 has made another appearance in a video featuring renders from all angles. Note that these are not official press renders of OnePlus 7. Just like other renders that have emerged online, this one also looks to be based on the reports and rumours thus far.

As expected, the video shows OnePlus 7 selfie camera which is a motorised pop-up module, similar to Vivo Nex. The front has higher edge-to-edge display than the current OnePlus 6T. The pop-up selfie camera module also allows OnePlus 7 to do away with the notch.

Rest of the elements such as location of volume buttons, slider button, USB Type-C port, and speaker grilles haven’t unchanged, according to the video. The back panel looks glossier than OnePlus 6 and OnePlus 6T models.

The video also gives a closer look at the triple rear camera setup. It’s a vertically aligned panel featuring three camera lenses along with LED flash. According to reports, OnePlus 7 will come with a 48-megapixel camera sensor, just like Xiaomi Redmi Note 7 Pro and Honor View20. 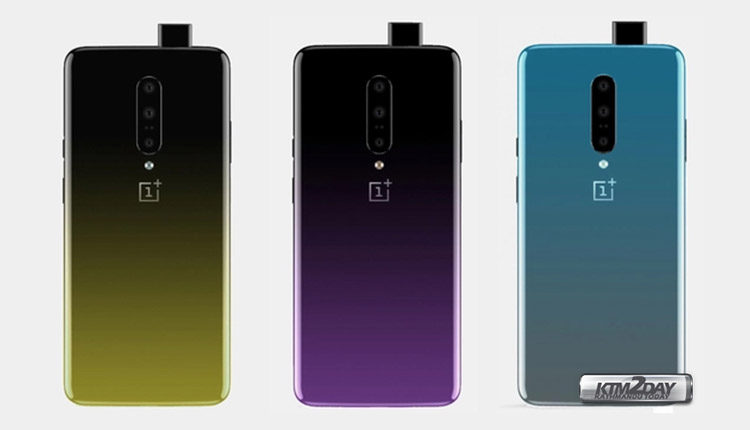 As far as specifications go, OnePlus 7 Pro is expected to come with a larger 6.5-inch full HD AMOLED display, Qualcomm Snapdragon 855 processor, 16-megapixel selfie camera, and up to 12GB RAM and 256GB storage.

Additionally, as there is no visible fingerprint sensor, we can expect the sensor to be embedded below the display. Furthermore, keeping at par with the growing trend of triple camera mobile phones, even this smartphone has been spotted with a triple camera setup on the rear panel.

Along with the design, the video also reveals the specifications of the smartphone. The smartphone will come with a 6.5-inch AMOLED display. Under the hood, it will be fuelled by the powerful Snapdragon 855 flagship processor. Furthermore, the smartphone will support 12GB RAM on the highest variant. For users who would rather opt for 8GB RAM mobile phones, a smaller 8GB RAM variant will also be made available. For storage, the smartphone will boast a sufficient 256GB of internal storage.

Moreover, for photography, OnePlus 7 will feature a triple rear camera setup which will include a combination of 48MP + 20MP + 16MP sensors. Likewise, on the front, the smartphone will feature a single 16MP camera for selfies and video calling. Overall, the smartphone will be backed by a 4000mAh battery with 44W fast charging support. It will run on the Android 9 Pie OS coupled with the OxygenOS skin on top.

The smartphone will most likely make its debut in May 2019. We can expect several more leaks and renders to appear online before the official launch. Stay tuned for more updates on the upcoming OnePlus flagship smartphone.