Samsung Galaxy A40 is an advanced and complete Android smartphone from all points of view with some excellences.

It has a large 5.9- inch display with a resolution of 2280×1080 pixels. The features offered by this Samsung Galaxy A40 are really many and of cutting edge. Starting with the LTE 4G module which allows an excellent data transfer and internet surfing. 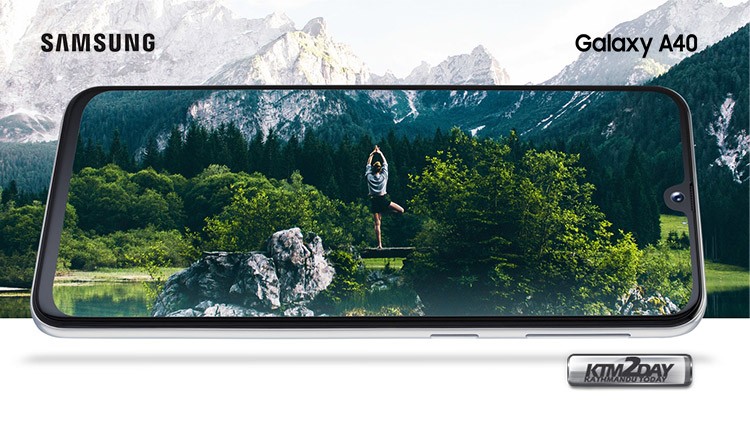 Samsung Galaxy A40 is a smartphone that we can consider compact since it is one of the few devices with a display diagonal of under six inches.

The Galaxy A40 is available in international market at a price equivalent to NRs. 32,500. At the time of writing, the A40 is awaiting its launch in Nepali market and could be released soon.

The A40 is one of the tiniest looking in the A-Series with a display size of 5.9-inch and comes with dimension of with 144 mm in length and 69 mm in width.

The back and the frame are entirely in plastic, but in this price range it is as predictable and does not necessarily represent a negative factor. Indeed, they contribute to making it more resistant to falls and above all lighter. It weighs only 140 grams. 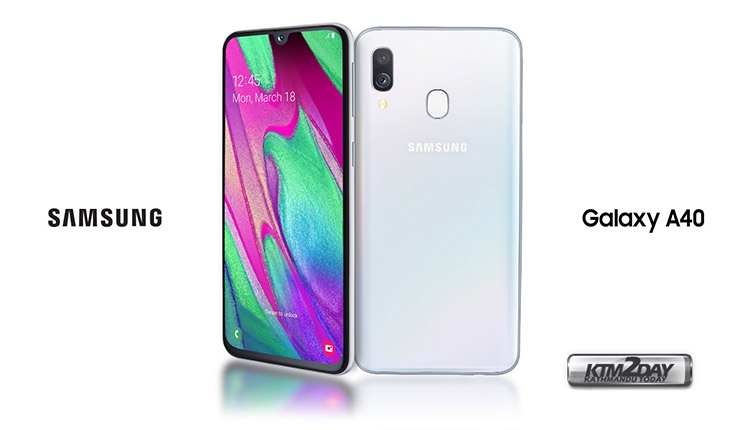 When struck by light, rainbow-like effects are created which make the smartphone more interesting.

The front is dominated by the display with very thin bezels. The panel used is a sAmoled with Full HD + resolution (2340×1080 pixels), which is certainly not obvious for this band. Samsung calls it Infinity-U because on top there is a small notch with a drop shape, like almost all the other components of the “Galaxy A” family.

Galaxy A40 does not stand out for its hardware power but it manages to be responsive in the most common tasks. Under the body we have an Octa-Core Exynos 7904 SoC which runs at 1.8GHz octa-core processor accompanied by Mali-G71 MP2 GPU and 4GB of RAM with 64GB of internal storage.The phone supports up to 512GB microSD cards.

As far as the camera is concerned, the Galaxy A40 comes with a dual-lens camera with a 16MP F1.7 main sensor and a 5MP F2.2 ultrawide secondary sensor. On the front, there is a 25MP F2.0 selfie camera. 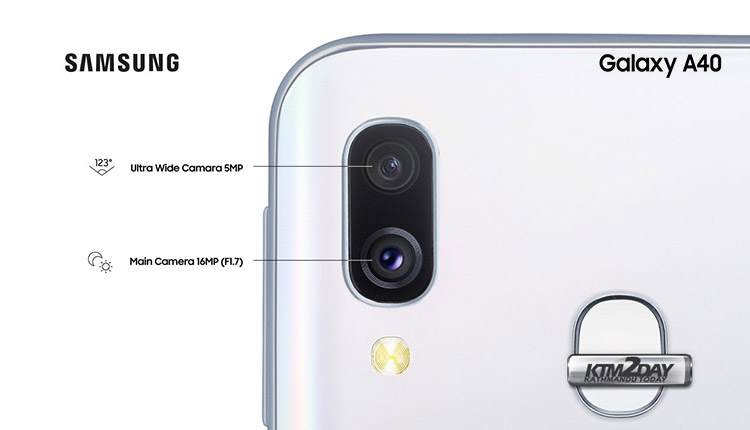 The device runs Android 9.0 Pie operating system-based One UI and has a fingerprint sensor at the back. The device also offers Face Unlock.

The advantage is that the chip has low power consumption and comes powered by a 3100mAh battery.

While there is no official word on as to when the Galaxy A40 would be launched in Nepal and at what price, the device would be available in Black, Blue, Coral and White.

Meanwhile, Samsung yesterday launched the Galaxy A70 in Nepali market at a price tag of NRs.47,500. The A70 comes with Qualcomm Snapdragon 675 processor, triple camera setup on the rear and has 6 GB of RAM and 128 GB of internal storage. 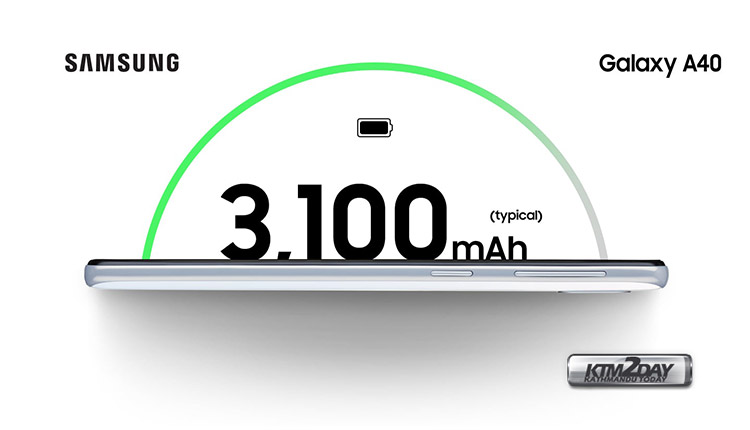