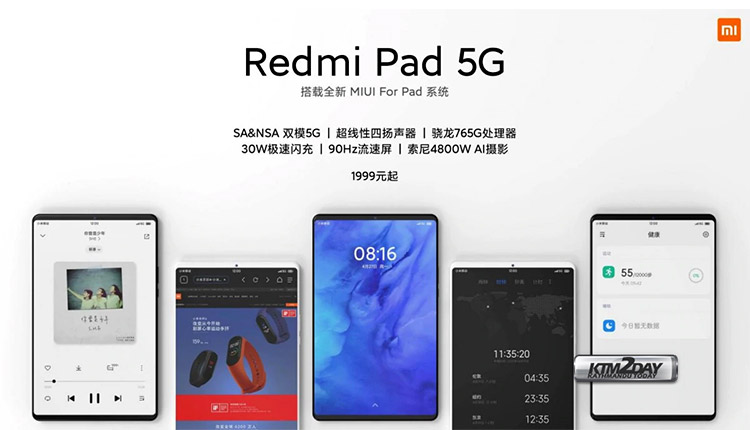 Yesterday, the first unofficial images and specifications of the Redmi Pad 5G tablet computer appeared on the Web, which will become the manufacturer’s first tablet.

It is expected that the Redmi Pad 5G will receive an ultra-thin design with narrow bezels, it will be available in black and white. According to preliminary information, Redmi Pad 5G will be equipped with Snapdragon 765G chipset with full support for fifth-generation networks.

Its screen is expected to get a refresh rate of 90 Hz and four loudspeakers will be included in the device.

The Redmi Pad 5G will also have a 48-megapixel Sony image sensor as main camera, which should help with the AR apps and games. The battery capacity is unknown yet but the poster says that the tablet will support 30W fast wired charging.

Given that it’s from Xiaomi, it will run on Android and will get the latest MIUI 12 overlay. However, Xiaomi has made a different version of MIUI for tablets, called MIUI for Pad. This sounds quite similar to Apple’s iPadOS and should bring in some big-screen friendly gestures as well as improved multitasking features.

Surprisingly, it wouldn’t cost much. The tip says that the Redmi Pad 5G will cost 1,999 Yuan (approx, NRs 34,500). This makes it one of the most affordable 5G devices from Xiaomi.