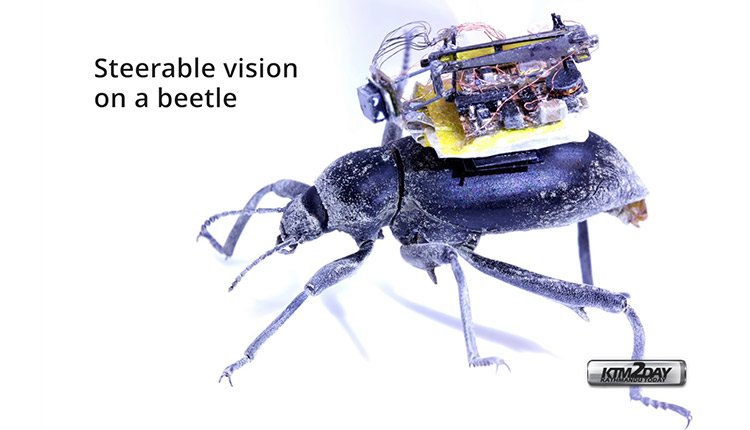 Researchers have developed a tiny wireless camera that is light enough to be carried by live beetles.

The team at the University of Washington in the US drew inspiration from the insects to create its low-powered camera system.

It’s beetle-cam can stream up to five frames per second of low-resolution, black and white footage to a nearby smartphone.The research was published in the Science Robotics journal.

The entire camera rig weighs just 250 milligrams, which is about a tenth of the weight of a playing card. While the sensor itself is low resolution, capturing just 160 by 120 pixel images, it is mounted on a mechanical arm that can shift from side to side.

That allows the camera to look side to side and scan the environment, just like a beetle, and capture a higher-resolution panoramic image. To conserve battery life, the researchers included an accelerometer in the system, so that it only takes photos when the beetle is moving.

This way, the camera was able to operate for six hours on a full charge. The beetles were not harmed and “lived for at least a year” after the end of the experiment. The researchers used what they had learned to produce an independent insect-sized camera robot.

The team claims it is the world’s “smallest terrestrial, power-autonomous robot with wireless vision”.

Rather than wheels, the robot moves by vibrating and can travel about three centimetres a second. Shyam Gollakota, senior author of the research, acknowledged that tiny camera robots could introduce new surveillance concerns.

“As researchers we strongly believe that it’s really important to put things in the public domain so people are aware of the risks and so people can start coming up with solutions to address them,” he said.