South Korean company Samsung has launched a new handset in the budget segment – Galaxy A12 Nacho quietly in the Russian market. The device seems to be quite similar to the Galaxy A12 launched earlier last year but now features a new Exynos chipset.

Aesthetically this new handset follows the design pattern of current phones launched by the company, such as including very soft corners and placing all the buttons on the right side.

As far as the screen is concerned, the device features a 6.5 inch PLS IPS display with 720 X 1600 pixels resolution and a notch (Infinity-V) to house the selfie camera in the center. The resolution of this handset is HD+, sufficient in principle for basic needs, and it does not lack an aspect ratio of 20:9 to consume multimedia content in the best possible way. The Galaxy A12 NAcho comes with Android 11, which is the latest official version of Google’s Android Operating System. Obviously, it does not lack the usual Samsung One UI customization in its version 3.1, which is also good news.

One of the great differences of this device with respect to the previous Galaxy A12 model is that, it has a different processor. Instead of using a MediaTek Helio P35, the manufacturer has opted in this case for an Exynos 850 . Its performance is guaranteed, and for example you will not have any problem when it comes to running messaging applications or while browsing the Internet. In addition, the device comes in several configurations of 3GB/32GB, 4GB/64GB and 4GB/128GB which is more than enough for daily use. The internal storage can also be further expanded with the help of micro-SD cards further upto 1TB.

The Galaxy A12 Nacho includes a quad camera setup on the rear with 48 megapixels main camera along with 5MP wide angle lens, 2MP depth sensor and 2 MP macro lens. On the front for selfies it features a 8 MP camera .

The phone is available in white, blue, black and red colors.

Interestingly, the device also features a large battery as the Samsung Galaxy A12 Nacho has a battery capacity of 5,000 mAh with fast charge of 15 W. 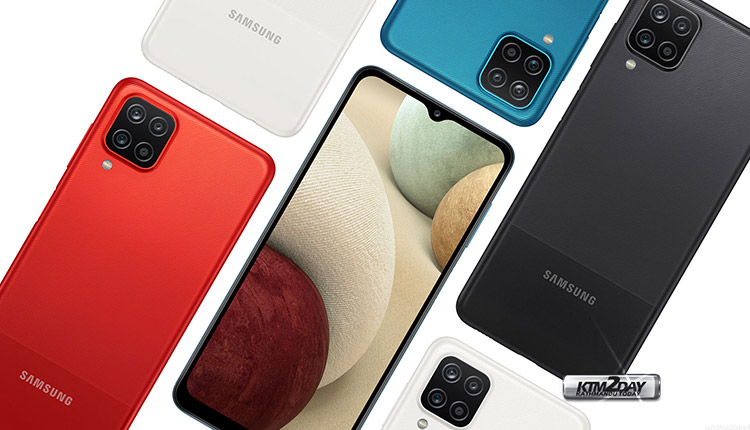 The device is available in Russian market at a price tag of $163 for 3GB/32GB and $190 for 4GB/64GB memory options. The device is expected to launch in Asian markets anytime soon.