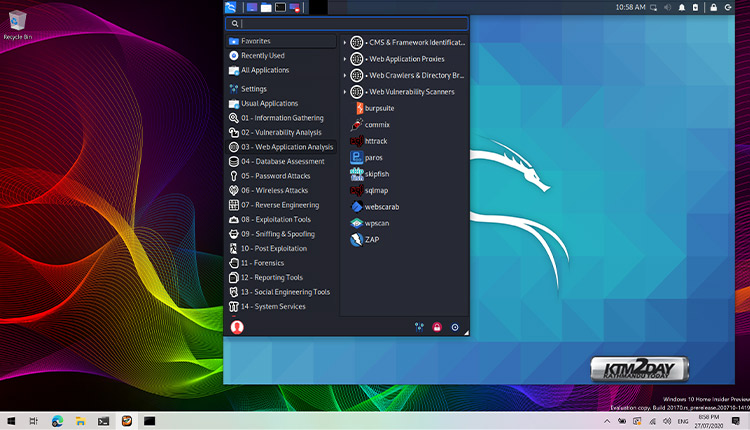 Windows 10 could earlier run Linux but with the release of May 2020 Update it began to support applications with graphical user interface (GUI) under the Linux platform. The developments in this segment can now be seen with the Kali Linux distribution , for example this distro can now run on Windows 10 with a complete graphical environment. It is a solution called Windows + Kali Desktop EXperience .

The fusion between the two ecosystems is now possible thanks to the Windows Subsystem for Linux (WSL) which, in its first version, translates system calls to Linux into equivalent calls to be executed by the Windows kernel.

However, the original WSL is very limited. As a result, Microsoft developed Windows Subsystem for Linux 2 (WSL 2) with a different approach: instead of simply translating calls, the new feature now brings a true Linux kernel inside a virtual machine.

Released with the May 2020 update to Windows 10, WSL 2 is based on the technologies of the Hyper-V virtualization architecture, which implies high integration with the Microsoft platform and optimized performance. WSL 2 even supports GPU acceleration, which can be useful for artificial intelligence applications.

But here, what interests us most is the execution of applications with a graphical interface based on Linux. The Kali Linux was updated this week to version 2020.3 . This has among its attractions a package called Win-Kex (Windows + Kali Desktop EXperience) that allows the execution of the distribution with the desktop environment Xfce in WSL 2.

To access Kali Linux on Windows 10, you need to run some command lines to install the distribution and, before that, install Windows Subsystem for Linux 2 , if it is not already installed (it is necessary to have Windows 10 version 2004 or higher).

Kali Linux on Windows 10 can be useful for testing applications or developing web services. This distribution is not usually recommended for novice users, but it is clear that Win-Kex can also be used for those who want to try Linux.

The installation instructions are in the Kali Linux site . The distribution can now be downloaded from the Microsoft Store .