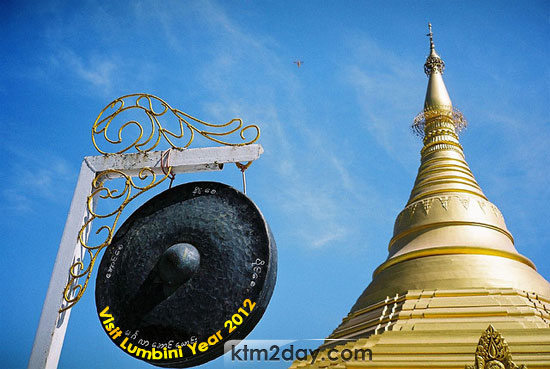 Visit Lumbini Year 2012 (VLY 2012) aims to attract 500,000 Buddhist devotees from around the world to Lumbini, the birthplace of Gautam Buddha in southern Nepal.

Acharya Karma Sangbo Sherpa, vice-chairman of the Lumbini Development Trust and joint coordinator of the national secretariat of VLY 2012, said the national campaign aims to bring one million visitors to Lumbini, half of them domestic and half of them foreign pilgrims. President Ram Baran Yadav is scheduled to inaugurate the campaign at the Central Canal at 2 pm on Jan 14.

The VLY 2012 national secretariat includes Minister for Culture Gopal Kiranti as a co-coordinator while secretaries from the ministries of Culture, Tourism, Home and Foreign Affairs are members representing the government. Suraj Vaidya, president of the Federation of Nepalese Chambers of Commerce and Industry (FNCCI), is leading the private sector.

The Nepal Tourism Year 2011 implementation committee and the Nepal Tourism Board are the implementing agencies of the campaign. Prime Minister Baburam Bhattarai formally announced VLY 2012 from the birthplace of Gautam Buddha on Dec 1, 2011. The cabinet declared 2012 as VLY on Oct 17, 2011 for the promotion and development of the Lumbini area.

“The objective of the campaign is to invite the world to work towards creating a peaceful society through the Buddha’s peace message while the campaign also aims to publicize to the world that Buddha was born in Nepal,” Sherpa said.

In a bid to attract Buddhist pilgrims from around the world, the secretariat has formed a sub-committee in South Korea where it will initiate a “one house, one image of Buddha” campaign, according to him. “We are planning to form such sub-committees in the US and Canada, among other countries,” he added.

On the national front, the secretariat plans to place 108 milestones on highways from the Mechi to the Mahakali and other entry points to show the way to Lumbini. Similarly, welcome boards have been planned at Tribhuvan International Airport, Bhairahawa, Solukhumbu and Pokhara, among other tourism spots.

The Ministry of Tourism and Civil Aviation (MoTCA) has allocated a budget of over Rs 5 million for the inauguration. The international promotion budget planned for NTY through consumer publicity programmes in China and India that could not take place in 2011 has been reallocated to the VLY campaign.

“After the completion of NTY, we have started VLY to continue and give mileage to the country’s tourism,” said MoTCA secretary Ganesh Raj Joshi. According to him, the government will officially conclude NTY announcing VLY in Lumbini. The government will also launch Vision 20, a tourism perspective plan during the inauguration.

“Lumbini has high influence on both domestic and international communities and Nepal should take advantage by linking religion with the country’s development,” Joshi added.

Considering the infrastructure, according to Sherpa, there are 24 high, middle and budget class hotels in Bhairahawa while four-five new hotels are to be opened soon. The trend of building hotels with modern facilities has intensified in Lumbini encouraged by an increase in arrivals.

“The government’s idea to announce VLY is very good, but it has happened without adequate preparation,” said Bikrum Pandey, managing director of Himalaya Expeditions which also runs Buddhist Circuits.com.

Although, Lumbini has a number of hotels developed within the last few years, it lacks air connectivity, transportation and international marketing.

It is estimated that business for the Buddhist circuit was about 400,000 tourists. Pandey added that the length of stay was nine to 10 days and daily spending amounted to US$ 150-250. “To grab the attention of the world’s Buddhist community, we are organising the Shakyamuni Buddha Lumbini Peace Marathon on Dec 5 in association with the Thai Embassy in Nepal,” Pandey added. According to Pandey, a 2,000 km long Buddhist circuit starts from Lumbini and passes through Kapilvastu, Shravasti, Kushinagar, Sarnath, Bodhgaya, Vaishali, Rajgir, Nalanda and Patna before returning to Lumbini.(Source:ekantipur)