Home » NEWS » Construction of Baneshwor flyover within this year

Construction of Baneshwor flyover within this year 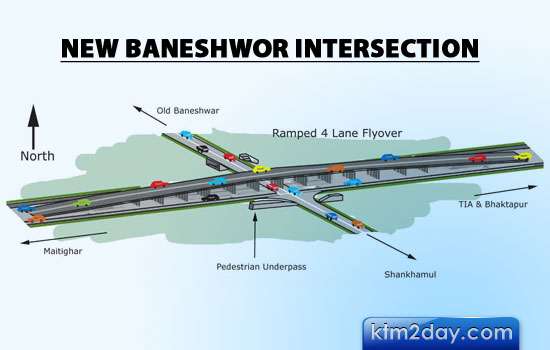 In the first week of September, two CCTV cameras were fixed at two different corners of Baneshwor intersection to figure out the exact numbers of vehicles and pedestrians passing through one of the busiest intersections of the Kathmandu valley every day.

The report also reveals a strikingly feature of traffic flow through Baneswhor junction. In other major intersections, rush-hour traffic means 9-11 a.m. in mornings and 4-6 p.m. in evenings. However, in Baneswhor rush-hour traffic begins at 9 in the morning and ends only at 6 in the evening. Over 6,000 vehicles pass through this junction every hour from 9 a.m. to 6 p.m.

It is almost impossible for motorists to cross Baneshwor junction without getting stuck in traffic jams. Pedestrians also have to wait for several minutes to reach the other side of the road.

“We are constructing a flyover soon,” says Tulasi Sitaula, secretary at Ministry of Physical Planning and Works (MoPPW). “Hassle-free crossing through Baneshwor junction is no longer a distant dream.”

If Sitaula is to be believed, the construction of a flyover at Baneshwor intersection is likely to begin by next fiscal year. “Budget is not a big deal,” he says. “We will surely manage it.”

As per the basic design, which was approved on March 5, the Baneswhor flyover will be 17 meters wide and 340 meters long.

The Kathmandu Valley Raod Expansion Project (KVREP) is currently building a 10-lanes road connecting Tinkune with Maitigharmandala. The Baneshwor flyover, the design of which is compatible with the new map of the upgraded Tinkune-Maitigharmandala road, will have four lanes.

At Baneshwor intersection, motorists going straight from Babarmahal to Tinkune, and vice versa, will have to use the ramped flyover.

Those motorists who need to turn into Shankhamul or Purano Baneshwor area will have to ply along the remaining six lanes, including two service lanes, of the upgraded Tinkune-Maitigharmandala road.

According to Nareshman Shakya, senior divisional engineer at the DoR, the ramped flyover will cater to at least 55 per cent of the total volume of traffic passing through Baneshwor junction every hour. “If 55 per cent motors will cross Baneshwor intersection through the ramped flyover, it will not be difficult for remaining 45 per cent motors to ply along the normal road,” says Shakya. “As per our projections, the Baneshwor flyover will easily deal with the growing volume of traffic till 2031,” says Shakya.

The grade-separated flyover will also have a pedestrian underpass. Once the flyover is constructed, pedestrians will no longer have to wait for the green light to cross the road. “They can cross the road any time they want,” says Shakya.

According to Baidya, the basic map of the Baneshwor flyover does not contain the design of a ramp for disabled people and cycles inside the pedestrian underpass. “The DPR, however, will include the design of the slope for wheel-chairs and cycles as well,” says Baidya.

In Nepal, no engineer has the experience of constructing a flyover as of now. Therefore, the DoR has already hired one structural engineer from the U.S. and one traffic engineer from Canada to assist Nepali engineers build the Baneshwor flyover.

Shortly after the Baneshwor flyover, the DoR will build four other flyovers in Kalimati, Tripureshwor, Thapathali and Purano Baneshwor chowks. “Constructing only one flyover at some place will not ease the traffic problem,” says Shakya. “Therefore, we will have to start the construction of four other flyovers as well in near future.”

Soil Test and AVIYAAN is finalizing the basic designs of four other flyovers also.(Source:Republica)