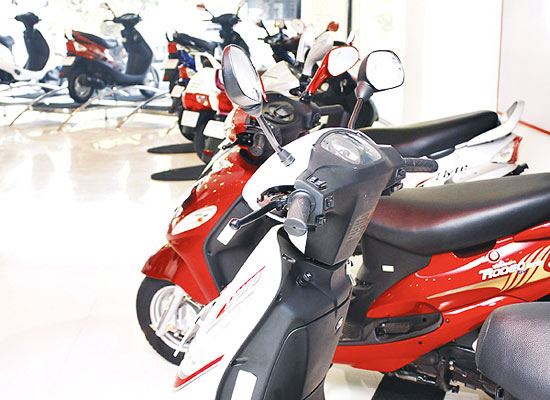 Scooters are emerging as a major component of Nepal’s two-wheeler market and they account for a significant share of annual sales. Enthused by the market response, distributors of various motorcycle brands have rolled out a number of scooters. The success of scooters in the domestic market can be gauged by the fact that five models were launched in the last two months. The market saw the arrival of a new version of the Honda Dio, the SYM Jet 4 and Orbit II from Taiwanese brand SYM, the Fencing 125 cc and the Swish from Suzuki.

Meanwhile, MAW Enterprises, the sole authorised distributor of Yamaha in Nepal, is planning to re-enter the scooter segment by launching the Yamaha Ray by the end of the year. Currently, scooters from Honda, Hero Honda, TVS and Mahindra are enjoying rising sales.

The domestic market saw approximately 21,000 units of scooters being sold in the fiscal year 2010-11. Traders estimate that sales grew to 27,000-28,000 units in the last fiscal. “Scooters now have a share of around 30 percent in the overall two-wheeler market,” said Saurav Jyoti, chairman of the Nepal Automobile Dealers Association (NADA). “The figure is increasing daily and it seems that the scooter segment will grow continuously for a few more years.”

According to Jyoti, the main reason behind the significant rise in scooter sales is convenience while riding and maximum utility.

“A scooter now has become a family vehicle.It offers maximum utility, and is convenient while riding. This is why sales have gone up,” he said. Apart from this, stylish looks and better performance of new generation scooters have encouraged customers to go for scooters. “Normally, scooters consume more fuel in comparison to a motorcycle. But scooter manufacturers have been introducing fuel efficient models. This has also played a positive role in the growth of sales,” said Jyoti.
Jyoti, who is also the distributor of Honda two-wheelers in Nepal, said that scooter sales account for 50 percent of their annual sales. Syakar Trading Company, which markets the Honda Dio and the Honda Aviator, claims to hold more than 50 percent of the two-wheeler market.

According to Sandeep Gurung, deputy general manger, sales at AIT, the authorised distributor of TVS two-wheelers in Nepal, scooter sales are picking up. “The scooter segment has shown notable growth in the past two-three years. This is a positive sign for the domestic automobile industry,” Gurung said. He added that the company had been witnessing a rise in its scooter sales by around 20 percent annually. AIT sells two models, the TVS Wego 110 cc and the Scooty Pep 90 cc. Gurung said that increasing use by women has helped to expand scooter sales.
Pramila Khatri, sales manager at Ganesh Enterprises, the sole authorised distributor of Suzuki in Nepal, said that scooter sales had been swelling as they fulfil the requirement of everybody in the family. “Even those who own a car are going for scooters as they are easy to ride and can be used by everyone in the family,” she said.