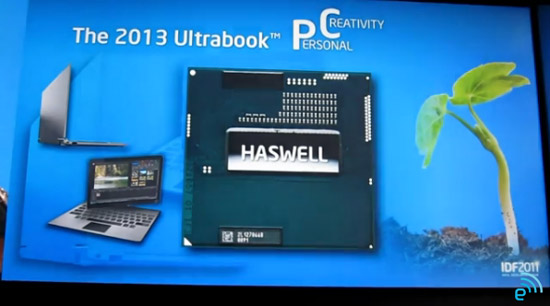 The next generation of Intel Core series processors will bring “the most significant” battery life capability improvement in Intel’s history, the company revealed during a demonstration of the technology at this week’s CES. The processor line, codenamed Haswell, will likely power the next round of Mac laptops and consumer desktops when it is released later this year.

The Haswell lineup will represent the fourth generation of Core series processors, dating back to the Nehalem microarchitecture launched in late 2008. Based on a 22 nanometer design, which is the same as the current generation Ivy Bridge series that powers all Macs except the Mac Pro, the line will bring improved integrated Intel HD graphics in addition to the claimed power efficiency improvements.

Since 2008, the Core series of CPUs have given Intel a considerable edge over the struggling AMD in both overall performance and efficiency. Now under threat from the more power-focused ARM architecture, variants of which power Apple’s iDevices and numerous other ultra-portable devices and computers, Intel has chosen to make power efficiency a key factor in Haswell’s development. Kirk Skaugen, vice president and general manager of the PC Client Group at Intel summarized the company’s intentions:

“The 4th generation Core processors are the first Intel chips built from the ground up with the Ultrabook in mind. We expect the tremendous advancements in lower-power Core processors, and the significant ramp of touch-based systems will lead to a significant new wave of convertible Ultrabooks and tablets that are thinner, lighter and, at the same time, have the performance required for more human-like interaction such as touch, voice and gesture controls.

Intel used the announcement to demonstrate a next generation tablet and Ultrabook combination device with a detachable keyboard dock. When connected to the dock, Intel claims the unit can achieve up to 13-hours of battery life.

Apple’s MacBook Air lineup does not fall within the “Ultrabook” category, which is primarily a Windows-based PC market. But the Cupertino-designed ultra-thin laptop will be able to take advantage of the power efficiency that Haswell offers. That is, of course, if the rumors that Apple is planning a switch to ARM-based chips for its MacBook line are not true.

Rumors thus far indicate that the MacBook line will receive updated components during a refresh this year, but will not see any drastic change in form factor. Apple is expected to refresh the lineup in June.

Known specifications of desktop and mobile Haswell processors are provided below: