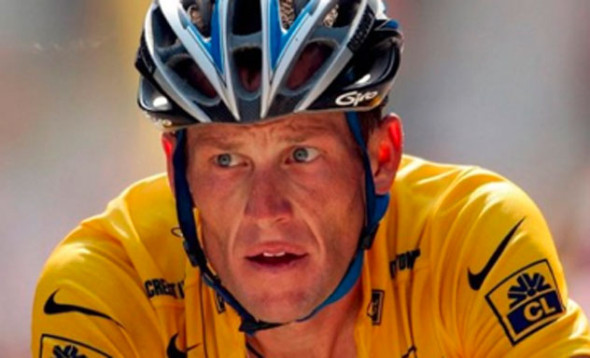 After years of bitter and forceful denials, he offered a simple “I’m sorry” to friends and colleagues and then admitted he used performance-enhancing drugs during an extraordinary cycling career that included seven Tour de France victories.

Armstrong confessed to doping during an interview with Oprah Winfrey taped Monday, just a couple of hours after an emotional apology to the staff at the Livestrong charity he founded and was later forced to surrender, a person familiar with the situation told The Associated Press. The person spoke on condition of anonymity because the interview is to be broadcast Thursday on Winfrey’s network.

The confession was a stunning reversal for the proud athlete and celebrity who sought lavish praise in the court of public opinion and used courtrooms to punish his critics.

For more than a decade, Armstrong dared anybody who challenged his version of events to prove it. Finally, he told the tale himself after promising over the weekend to answer Winfrey’s questions “directly, honestly and candidly.”

Winfrey was scheduled to appear on “CBS This Morning” on Tuesday morning to discuss the interview. She tweeted shortly after the interview: “Just wrapped with (at)lancearmstrong More than 2 1/2 hours. He came READY!”

The cyclist was stripped of his Tour de France titles, lost most of his endorsements and was forced to leave Livestrong last year after the U.S. Anti-Doping Agency issued a damning, 1,000-page report that accused him of masterminding a long-running doping scheme.

Armstrong started the day with a visit to the headquarters of the Livestrong charity he founded in 1997 and turned into a global force on the strength of his athletic dominance and personal story of surviving testicular cancer that had spread to his lungs and brain.

About 100 Livestrong staff members gathered in a conference room as Armstrong told them “I’m sorry.” He choked up during a 20-minute talk, expressing regret for the long-running controversy tied to performance-enhancers had caused, but stopped short of admitting he used them.

Before he was done, several members were in tears when he urged them to continue the charity’s mission, helping cancer patients and their families.

“Heartfelt and sincere,” is how Livestrong spokeswoman Katherine McLane described his speech.

Armstrong later huddled with almost a dozen people before stepping into a room set up at a downtown Austin hotel for the interview with Winfrey. The group included close friends and lawyers. They exchanged handshakes and smiles, but declined comment and no further details about the interview were released because of confidentiality agreements signed by both camps.

Winfrey has promoted her interview, one of the biggest for OWN since she launched the network in 2011, as a “no-holds barred” session, and after the voluminous USADA report – which included testimony from 11 former teammates – she had plenty of material for questions. USADA chief executive Travis Tygart, a longtime critic of Armstrong’s, called the drug regimen practiced while Armstrong led the U.S. Postal Service team “the most sophisticated, professionalized and successful doping program that sport has ever seen.”

USADA did not respond to requests for comment about Armstrong’s confession.

Hein Verbruggen, the former president of the International Cycling Union, said Tuesday he wasn’t ready to speak about the confession.

“I haven’t seen the interview. It’s all guessing,” Verbruggen told the AP. “After that, we have an independent commission which I am very confident will find out the truth of these things.”

For years, Armstrong went after his critics ruthlessly during his reign as cycling champion. He scolded some in public and didn’t hesitate to punish outspoken riders during the race itself. He waged legal battles against still others in court.

At least one of his opponents, the London-based Sunday Times, has already filed a lawsuit to recover about $500,000 it paid him to settle a libel case, and Dallas-based SCA Promotions, which tried to deny Armstrong a promised bonus for a Tour de France win, has threatened to bring another lawsuit seeking to recover more than $7.5 million awarded by an arbitration panel.

In Australia, the government of South Australia state said Tuesday it will seek the repayment of several million dollars in appearance fees paid to Armstrong for competing in the Tour Down Under in 2009, 2010 and 2011.

“We’d be more than happy for Mr. Armstrong to make any repayment of monies to us,” South Australia Premier Jay Weatherill said.

Betsy Andreu, the wife of former Armstrong teammate Frankie Andreu, was one of the first to publicly accuse Armstrong of using performance-enhancing drugs. She called news of Armstrong’s confession “very emotional and very sad,” and choked up when asked to comment.

“He used to be one of my husband’s best friends and because he wouldn’t go along with the doping, he got kicked to the side,” she said. “Lance could have a positive impact if he tells the truth on everything. He’s got to be completely honest.”

Betsy Andreu testified in SCA’s arbitration case challenging the bonus in 2005, saying Armstrong admitted in an Indiana hospital room in 1996 that he had taken many performance-enhancing drugs, a claim Armstrong vehemently denied.

“It would be nice if he would come out and say the hospital room happened,” Andreu said. “That’s where it all started.”

Former teammate Floyd Landis, who was stripped of the 2006 Tour de France title for doping, has filed a federal whistle-blower lawsuit that accused Armstrong of defrauding the U.S. Postal Service. An attorney familiar with Armstrong’s legal problems told the AP that the Justice Department is highly likely to join the lawsuit. The False Claims Act lawsuit could result in Armstrong paying a substantial amount of money to the U.S. government. The deadline for the department to join the case is Thursday, though the department could seek an extension if necessary.

According to the attorney, who works outside the government, the lawsuit alleges that Armstrong defrauded the U.S. government based on his years of denying use of performance-enhancing drugs. The attorney spoke on condition of anonymity because the source was not authorized to speak on the record about the matter.

The lawsuit most likely to be influenced by a confession might be the Sunday Times case. Potential perjury charges stemming from Armstrong’s sworn testimony in the 2005 arbitration fight would not apply because of the statute of limitations. Armstrong was not deposed during the federal investigation that was closed last year.

Armstrong is said to be worth around $100 million. But most sponsors dropped him after USADA’s scathing report – at the cost of tens of millions of dollars – and soon after, he left the board of Livestrong.

After the USADA findings, he was also barred from competing in the elite triathlon or running events he participated in after his cycling career. World Anti-Doping Code rules state his lifetime ban cannot be reduced to less than eight years. WADA and U.S. Anti-Doping officials could agree to reduce the ban further depending on what information Armstrong provides and his level of cooperation.