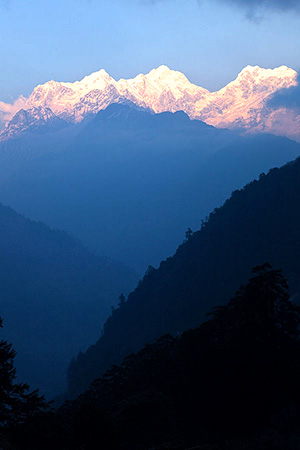 The number of foreign tourists visiting controlled areas recorded an increase of 11.2 percent year on year. In 2013, there were 12,937 trekkers entering restricted regions while the figure for 2012 was 11,632 trekkers.

According to the Ministry of Culture, Tourism and Civil Aviation, the Manaslu region in western Nepal received the highest number of trekkers last year among controlled areas.

The number of foreign trekkers in Manaslu jumped 33.75 percent to 4,439 in 2013. Manaslu was opened for trekking in 1991, and it is considered to be a controlled area.

Foreigners are required to get special permits from the Department of Immigration to travel to these areas. Also, permits are not given to individual trekkers. Only trekkers travelling in a group through a government authorized trekking agency can apply for the permit. Permit fees range from US$ 10 per week to US$ 500 for 10 days depending on where you go.

The government had declared most of the villages in Taplejung, Sankhuwasabha, Solukhumbu, Dolakha, Rasuwa, Gorkha, Mustang, Manang, Dolpa, Mugu and Humla districts bordering China’s Tibet region as restricted or controlled areas during the 1970s.

Trekking agencies and tour operators have been lobbying with the government to open up such areas that have an immense potential to contribute to the country’s tourism as well as the local economy.

Last year, a committee formed under Purna Chandra Bhattarai, joint secretary at the Tourism Ministry, and representatives of the including private sector had prepared a report which urged the government to open up some of the restricted areas.

According to Mahindra Singh Thapa, immediate past president of the Trekking Agencies Association of Nepal (Taan), they have recommended opening up Mustang, Upper Dolpa, Taplejung and Manaslu in the first phase to the government. “The report has been sent to the Home Ministry, however, due to the absence of a minister, nothing has been done about it.”

Thapa said that Taan recently met with Chief Secretary Lilamani Poudel and reminded him about the issue.

“We were informed that lifting restrictions on tourism would require a huge amount of resources as Armed Police Force personnel would have to be stationed and infrastructure constructed in the border areas,” Thapa said. “However, the chief secretary is positive about opening the controlled areas which can contribute to the region immensely.”

In the 1970s, the government imposed restrictions on the movement of foreigners in a number of northern villages bordering Tibet as Khampa rebels were using Nepali territory to wage war against the Chinese authorities. In 1974, the Nepal Army succeeded in completely disarming the Khampa rebels, but the travel restrictions remained.

Meanwhile, obtaining special travel permits to visit such areas entails a lot of bureaucratic hassles. “In such a scenario, the Tourism Ministry has also asked the government to implement a one-step policy for the issuance of travel permits.” Thapa added that the government should realize where the Everest and Annapurna regions have reached economically. “Manaslu is in the Annapurna area, but it is far underdeveloped due to the restriction,” Thapa said, adding that Taan had asked the government to reduce the permit fee besides allowing single travellers to visit such restricted areas.