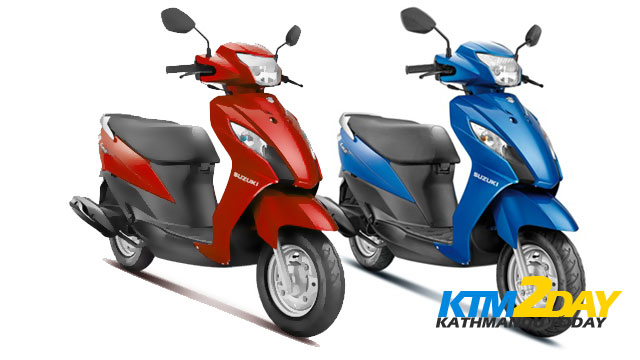 Let´s, the latest offering from Suzuki Motorcycle India, has been launched in the Nepali market.

VG Automobiles, the authorized distributor of Suzuki motorcycles for Nepal, launched the 110cc scooter amid a function in Kathmandu on Tuesday.

“Suzuki has tried with different styles in Let´s which is youth centric and attractive in looks,” Shrestha said, adding that the launch of stylish Let´s will certainly make the position of Suzuki two-wheelers strong in Nepal.

The Let´s comes with 112cc four-stroke single air cooled engine generating maximum output of 8.7bph at 7,500 and maximum torque of 9Nm at 6,500rpm. The scooter is powered by a light and compact SEP (Suzuki Eco Performance) engine technology that helps to boost high fuel efficiency of 63km per liter, according to the company.

Moreover, the company claimed that surface structure of Let´s is inspired by luxurious European cars.

“Let´s is doing brisk business in India and we hope that the scooter will do well in Nepal as well,” Jitendra Singh Rathore, zonal manager of Suzuki Motorcycle India, said. “Let´s is a practical unisex scooter specially designed for the market of India and Nepal.”

The scooter is equipped with telescopic-type front forks, rear suspension, 5.2 liter fuel tank and highly-rigid tubeless tires, according to the company.

´The scooter is easy to handle and comfortable to ride as it weighs only 98 kg.” Bibek Bijukchhe, CEO of VG Automobiles, said.

VG Automobiles targets to sell around 5,000 units of Let´s within a year of its launch.