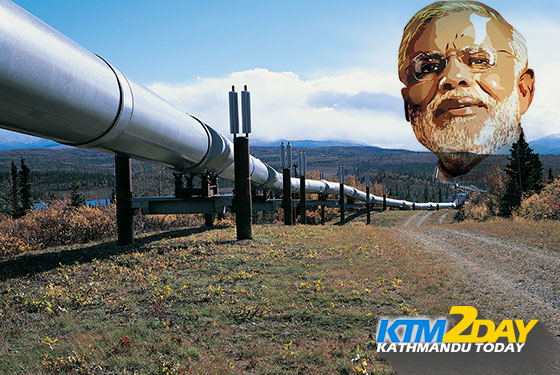 Indian Oil Corporation (IOC) had first the proposed the Raxaul-Amlekhgunj pipeline in 1995, but it has yet to materialise due to the lack of clarity and indecision on part of the Nepal government and changed Indian policy. Indian External Affairs Ministry had directed the IOC not to go ahead with the project without the former’s approval.

However, during his speech at the Parliament, the Indian Prime Minister said he would work to materialise the project. “Nepal has been importing petroleum products through trucks. The time has changed now,” said Modi. “Why not to import through a pipeline? I will complete the work.”

According to the Indian Express Online, Pradhan argued in a letter to Modi the construction of the project would help in confidence building between the two countries and taking bilateral relations to an even higher level.

“Though Ministry of External Affairs has advised Indian Oil Corporation not to make any commitments regarding the pipeline without consulting it, it is felt that a commitment at this stage to bear the cost of pipeline and its early execution can be a huge confidence-building measure,” Petroleum Minister Pradhan wrote to Modi on Thursday, according to the Indian Express Online.

In his letter, Pradhan asked Modi the commitment from him on IOC building the pipeline would secure the Indian company’s interest in maintaining supplies of petroleum products in Nepal.

A Nepali delegation led by Minister for Commerce and Supplies Sunil Bahadur Thapa had raised the issue during its meeting with Pradhan last in New Delhi Wednesday. Jib Raj Koirala, joint-secretary at the ministry who was also a member of Nepali delegation, said they proposed the Indian side to develop the pipeline as a “gift project”. The 41km pipeline is expected to reduce the cost of transporting petroleum, minimising leakages and frequent disruption in supplies due to tanker operators’ anomalies. The pipeline will connect IOC’s depot in Raxaul and Nepal Oil Corporation Depot (NOC) depot in Amalekhgunj.

NOC Managing Director Chandika Prasad Bhatta said the pipeline would ensure smooth supply of petroleum products and problems like petroleum theft and tanker operators’ malpractices would be controlled. The project, which would cut oil transportation cost by more than 50 percent, has been proposed, debated and revised several times since 1995.

Nepal has been indecisive on how to get involved in the project. On Feb 17, 2010, the Cabinet had approved NOC’s new action plan for the project. As per the plan, Nepal and India would construct the pipeline separately in their respective territories. The pipeline would then be linked after signing a bilateral pipeline treaty.

With India willing to build the pipeline on its part by itself, NOC officials were not clear how Nepal’s part would match the Indian part as the Indian side would use a different consultant.

On the other hand, Indian External Affairs Ministry was not happy with Nepal’s demand for financial aid for the construction of the project on the Nepal side as well as little sensitivity towards the security of the project, according to the Indian newspaper.