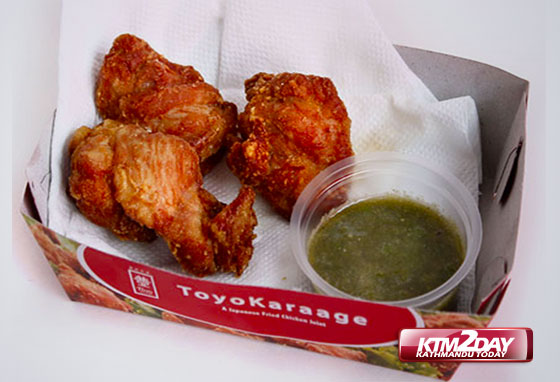 After the success of its maiden outlet in Thapathali, Kathmandu, ToyoKaraage (Japanese Fried Chicken) has opened two outlets at Maharajgunj and Baluwatar.

Toyokaraage is a leading fried chicken brand based in Japan. Japanese Ambassador to Nepal Masashi Ogawa inaugurated the outlets amid a programme on Saturday.

According to Binaya Upadhayaya, chairman of JFC Nepal, the demand of Toyokaraage is on the rise and the taste is getting popular among the Nepalese.

“We have planned to open around 25 such outlets in Nepal within a year,” Upadhayaya said, adding the parent company in Japan maintains around 30 restaurants, apart from outlets in numerous other countries.

Toyokaraage uses Nepali chicken which is mixed with other special ingredients that are imported from Japan at par with Japanese standards.

Price of Japanese chicken ranges from Rs 142 to Rs 850, exclusive of VAT.