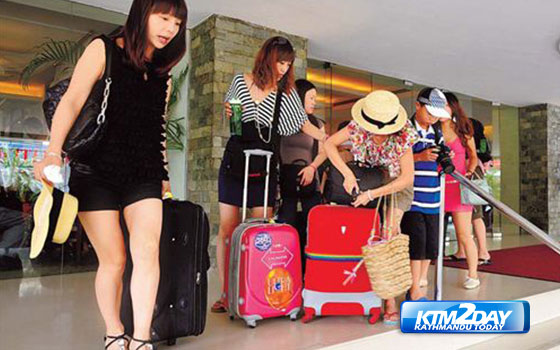 Chinese tourists will not have to pay visa fee to enter Nepal henceforth.

In a bid to boost arrivals from the north, the Cabinet on Friday decided to waive the fee for Chinese visitors—a facility enjoyed only by visitors from Saarc countries so far.

The Chinese government also lifted travel advisories to its citizens travelling to Nepal with immediate effect. The advisory was issued by the Chinese consular service network in the context of earthquakes in Nepal. “This marks the tour normalization for Chinese citizens in Nepal,” read a Chinese Foreign Ministry statement. Foreign visitors have to pay $25 for a 15-day visa and $40 and $100 for 30-day and 90-day visas, respectively.

Over the past decade, Chinese tourist arrivals have jumped more than fivefold, making the northern neighbour Nepal’s second largest source market, attesting to the growing popularity of the Himalayan country among Chinese vacationers.

The China National Tourism Administration categorised Nepal under the Approved Destination Status (ADS) for the first time in November 2001, after which Chinese citizens came to Nepal officially as tourists. Before 2000, the Chinese were allowed to travel to Nepal only on official visits.

In February last year, Nepal and China signed a revised bilateral air services agreement (ASA), permitting the operation of 56 flights per week. Under the old ASA, Chinese airlines were allowed to operate 14 flights every week to Nepal.
Favourite places in Nepal for the Chinese are Kathmandu, Pokhara, Jomsom and Muktinath. They are also shifting towards soft adventure sports like trekking, paragliding and rafting of late.