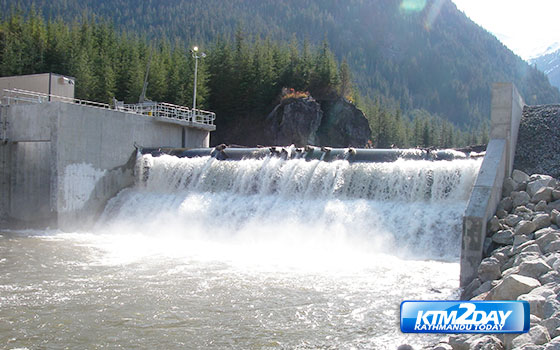 Nepal added mere 41 MW of hydropower in national grid in 2015. However, it was better compared to past years. Projects with combined capacity of 76 MW had come into operation in five years till 2014.

Though energy demand is increasing by the year, there is a yawning gap between demand and supply. While total generation stands at 759 MW, demand peaks at over 1,300 MW. The government plan of completing Chameliya (30 MW) and Kulekhani III (14 MW) in 2015 remained only in papers.

Six years ago, Nepal and Ethiopia were more or less at the same level in terms of hydropower generation. However, Ethiopia has harnessed 3,200 MW of hydropower so far. It is one of the fastest growing economies in the world, logging growth of above 10 percent in recent years.

“Ethiopia was poorer than Nepal and had lower per capita income in 2009. But its per capita income is rising fast. One of the drivers of this growth forward is foreign investment in hydropower project,” said former energy secretary Shital Babu Regmi.

Once the poorest country in the world, Ethiopia is now building a reservoir type Grand Renaissance Project (6,000 MW) on Blue Nile River. The project has already generated 700 MW in the first phase. The project, which is estimated to cost US$ 4.6 billion, is slated to be completed by 2017. Ethiopia has hydropower potential of 60,000 MW compared to Nepal’s potential 83,000 MW.

Nepal has also prioritized hydropower development. It has also devised plans and policies for hydropower development. Unfortunately, they have not come into implementation. The 1,200-megawatt Budhigandaki project was identified back in early 1980s. But the government decided to develop it only in 2009 when energy crisis was at its peak. But very little has been done in terms of project development in the past six years.

“Nepal was among the first countries in the region to harness hydropower. It is a matter of shame that we have the lowest hydropower generation and lowest per capita electricity consumption in our region,” Oli told the meeting of Agriculture and Water Resources Committee of the parliament last week. Nepal’s per capita electricity consumption of 128 units is the lowest among its neighboring countries.

Government officials and hydropower experts alike agree the funding is not a problem for Budhigandaki hydropower project which is estimated to cost Rs 250 billion. The problem is, development modality of the mega project has not been decided yet.

“We have repeatedly asked the Ministry of Energy to finalize development modality at the earliest,” said Gagan Thapa, Chairman of AWRC.
Budhigandaki Hydroelectric Project Development Committee is executing the project at present. But many believe the development committee modality is outdated and not fit to develop project of this scale as it cannot operate as an independent entity and collect fund from the general public.

AWRC Chairman Thapa, who is actively holding meetings with officials of Ministry of Energy and other line agencies, is frustrated with the work of government agencies.

Several hydropower projects are in different phases of construction. However, these projects are facing the same problems at present that they faced last year, Thapa said.

Energy sector always gets priority in and fiscal policies and periodic plans. But this priority is never translated into action. Country’s annual export earning is far lower than the amount it spends to import fossil fuel. Fuel import is growing by 20 percent annually against economic growth of 3 to 4 percent.

“But staggering rise in fuel imports does not reflect in economic output as consumption goes only in non-productive sectors,” Amrit Man Nakarmi, Professor at Center for Energy Studies at Institute of Engineering, said. “Even in this situation of fuel crisis, the government’s policy has remained only in papers. It seems that the governments have unwritten policy of doing nothing,” Nakarmi said.

Nakarmi claims hydropower can at least replace diesel and LPG worth Rs 50 billion, or 42 percent of total fuel consumption, annually.
In 2011, Natural Resources and Means Committee of parliament had directed the Ministry of Energy and line agencies to prepare national energy security policy for 25 years, incorporating issues like energy generation and consumption, energy trade, and energy security. But nothing has been done in this direction so far. Thapa’s committee issued the same directive to the Ministry of Energy, Nepal Oil Corporation and other agencies soon after India’s unofficial blockade affected supply of petroleum products.

“Ministry of Energy has been doing nothing. It only creates obstructions due to its indecisiveness,” Thapa told a meeting of AWRC, which was also attended by Minister for Energy Top Bahadur Raymajhi, last week.

The government hasn’t added any hydropower plant in the electricity system since Middle Marshyangdi (70 MW) was connected to the national grid in 2008. However, independent developers have added 120 MW to the system since that time.

Indecisiveness of the government is also affecting hydropower projects being developed by the private sector. Independent power producers are suffering from multiple problems like refusal of Nepal Electricity Authority (NEA) to sign power purchase agreement. Power developers have to knock the doors of as many as 7 ministries and 23 different government agencies for licensing and permissions.

Hydropower Development Policy 2001 has envisioned splitting of Nepal Electricity Authority to make it more efficient and usher in reforms in the energy sector. But the policy has remained only in papers.