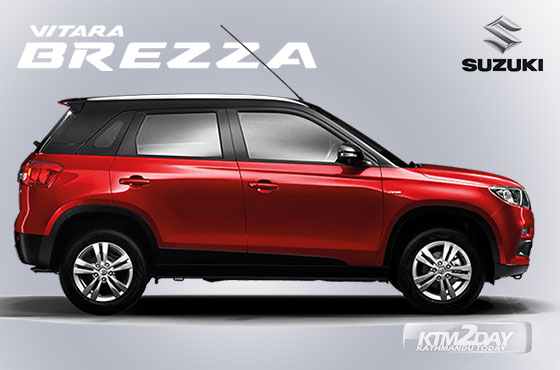 CG NXT GEN, the authorised dealer of Suzuki four-wheelers in Nepal, has rolled out a sporty SUV, the Vitara Brezza. Priced at Rs 35,99,000, the Brezza is available in five variants in the market.

The Vitara Brezza has a 1,248 cc diesel engine which is mated to a five-speed gearbox. The power plant churns out a peak torque of 200 Nm at 1,750 rpm. The car features a smart play infotainment system with Apple Car Play, cruise control and anti-pinch guard power window.

“The Brezza is an ideal vehicle to compete in the SUV segment as it is one of the strongest vehicles with an excellent engine,” said Karan Chaudhary, executive director of CG Motocorp. “Moreover, the vehicle will move the competition in the SUV segment to a completely different level.”

Other features include dual airbags, ABS, the segment’s first dual color scheme, Suzuki’s innovative TECT system that adds to the safety design, steering mounted control and parking sensor with camera, among others, the dealer said. The Vitara Brezza gives a mileage of 24.3 kmpl, the company claimed.

The SUV is expected to rev up competition in the fastest growing automobile segment in Nepal. The auto has been launched in dual colour schemes and has muscular wheel arcs featuring sporty alloy wheels.

Inspired by Suzuki’s global compact SUV, the Vitara, the design inferences in the Brezza make it a virile looking and rightly proportioned compact SUV. The Vitara Brezza flaunts a floating roof design which adds to the feeling of lightness and speed imprinting athletic and aggressive character.

The SUV has a ground clearance of 198 mm, fuel tank capacity of 48 litres, seating capacity of five and a boot space of 328 litres. The instrument cluster in the car is of a new design and sports ‘mood lightning’, and has a multi-information display between the tachometer and speedometer that provides instantaneous data on fuel consumption, available range and average speed.