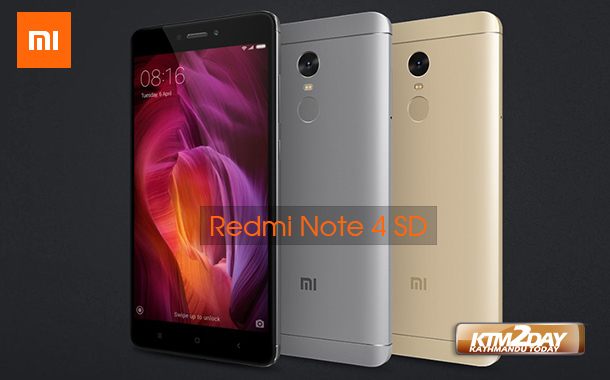 Xiaomi has finally launched its latest phone from the Redmi series, the Redmi Note 4 SD in Nepal. Vatsallmpex is the official distributor for Xiaomi products in Nepal.

The brand Xiaomi is well known to tech-savvy people for being a company that deals with smartphones, mobile apps along with various design and production worldwide. Coupled with the fact that their products are priced aggressively while keeping the quality up is the reason why Xiaomi has a legion of fans.

So it is no surprise when Xiaomi launched the Redmi Note 4 SD, it sold insanely well. According to Xiaomi, they have sold over 1 million units of Redmi Note 4 SD in the Indian market and is their fastest selling smartphone in India. Their statistics revealed that 1 unit of Redmi Note 4 SD was sold every 4 seconds.

With a 5.5 inch FHD display that using in-plane switching technology to ensure great viewing angles, this phone is perfect for consuming media content, claims the company. Powering the phone is the Snapdragon 625 processor clocked at 2 GHz to ensure that apps load quickly. There is 64 GB of internal storage along with 4 GB of RAM. The internal storage can be expanded via microSD card of up to 256 GB.

The Redmi Note 4 SD features a 13 Mega-pixel camera on the rear with dual tone LED flash while the front camera is a 5 Mega-pixel unit. Both the front and rear camera have f/2.0 aperture. With a massive 4100mAh battery and the latest MIUI 8 based on Android 6.0.1 Marshmallow, the phone will not run out of juice anytime soon according to the company.

The Redmi Note 4 SD is a perfect example of a phone that has gone through an iteration process instead of a full redesign, working out the kinks in previous phones while adding new features. The proverb, “If it ain’t broke, don’t fix it?” is an apt description for the latest phone in the Redmi Note series.

The Redmi Note 4 SD is available for purchase at Mi showrooms located at LABIM Mall, Pako New Road and authorised retail stores all over Nepal.