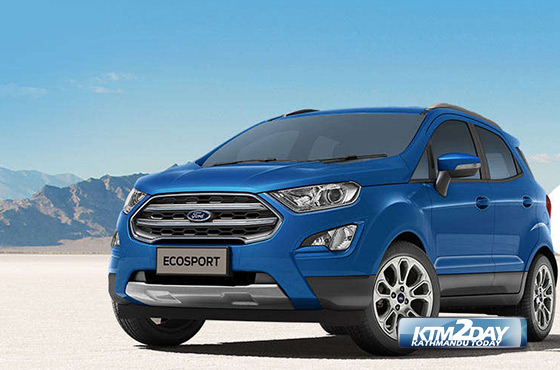 Ford is embarking on a new journey with the all new Ford EcoSport in Nepal, which has been comprehensively redesigned with more than 1,600 new parts. The EcoSport is Ford’s take on the compact SUV segment.

Pricing for the all new Ford EcoSport starts from Rs3,390,000. “The new Ford EcoSport comes with a formidable combination of fun, style and technology,” said Anurag Mehrotra, president and managing director, Ford India. “With its best in class power, safety, convenience and value proposition, it delivers significantly more at the same price. It is another game changing product from Ford, that will raise the bar for compact SUVs”.

Ford is looking to build on the dynamic appeal of its predecessor, starting with a reshaped front, a larger upper trapezoidal grille and lower grille that gives the EcoSport its signature Ford look. The company has added a wider central dome on the sculpted hood for a more muscular appearance and a continuous line running from the beltline along the edge of the hood to accentuate the sleek new headlamps with LED daytime running lights, reads a press release.

Bold fog lamps complete the face of the EcoSport and give it an edgier, more aggressive look. The company is offering bigger 17-inch alloy wheels on their top-of-the-line Titanium variant for better control and even more aggressive stance.

Customers looking to pick up the new Ford EcoSport can choose from two engine options, a 1.5 litre Ti-VCT petrol engine or the 1.5 TDCi diesel engine. The company is looking to translate Ford’s fun to ride DNA into the new EcoSport with the introduction of a new engine option, the 1.5 litre Ti-VCT petrol engine that’s smaller, lighter and efficient.

Ford claims that the new engine will deliver segment best 123 PS of power and 150 Nm of torque with outstanding fuel efficiency of 17km per litre. Ford is also offering an all new six-speed automatic transmission with the petrol engine that promises smooth, precise shifts. Users can opt for the five-speed manual transmission as well. The new EcoSport will also be available with a diesel engine. The trusted and reliable 1.5 litre TDCi diesel engine from Ford is mated to a five-speed manual transmission that delivers best in class 100 PS of power and fuel efficiency of 23km per litre, states the release.

Inside the cockpit of the new EcoSport lies Ford’s in-car infotainment system, SYNC 3, which allows drivers to control their entertainment, climate settings as well as their connected smartphone through voice commands. SYNC 3 has also been updated to be Apple CarPlay and Android Auto compatible.

Ford’s latest EcoSport will be the only vehicle in the segment to offer up to six airbags—dual front driver and passenger side airbags—along with Anti-Lock Braking System (ABS) as standard equipment across all variants, reads the press release. It will also feature ‘Emergency Assistance’ a technology that calls emergency services from a paired phone to ensure help is always within reach.

According to Ford, the compact SUV has been built using high-strength steel and will feature a host of safety features including emergency brake assist, traction control system, impact absorbing door panels and more.