Oppo made quite a splash on the mobile scene with the original Realme 1, mainly for its extremely budget price tag. Now, just a few months later, it is already clear that the Chinese OEM intends to ride the PR wave and release a Realme 2 successor, of sorts.

The Realme 2 is all set to launch in India tomorrow, and there is very little that we don’t know about it. The rumors and leaks so far have painted a vivid picture of what to expect from the upcoming device. Now, a massive leak has pretty much revealed everything we need to know about the Realme 2.

The leak by AndroidPure shows a detailed spec sheet for the Realme 2. While we can’t comment on its authenticity, many of the aspects do fall in line with previous leaks. The notched smartphone will feature dimensions of 156.2×75.6×8.2 mm, and weigh 168 grams.

Realme 2 leaked specifications, features
As per the leak, the Realme 2 6.2-inch HD+ (1520×720 pixels) display with a notch and 19:9 aspect ratio. Under the hood will be a Qualcomm Snapdragon 450 octa-core SoC. Buyers will be able to choose from two variants – 32GB+3GB, and 64GB+4GB. The internal storage on both variants will be expandable with the use of a microSD card. 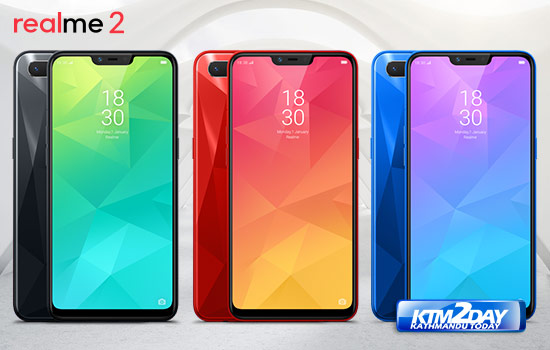 Making sure everything ticks will be a 4,230mAh battery, and for security there will be a fingerprint sensor and face unlock. For connectivity, the dual-SIM device will support VoLTE on both slots. On the software front, the device will run Android 8.1 Oreo-based Color OS 5.1. 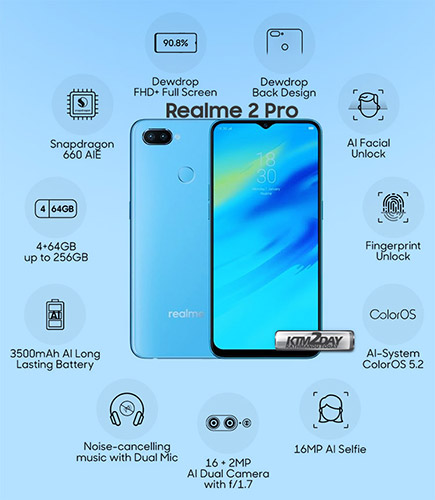 It is already known that the Realme 2 will be exclusive to Flipkart, and will be launching tomorrow at 12:30PM. Like the Realme 1, the upcoming device too is expected to be affordable with a price tag below INR 10,000. In this segment, it will undoubtedly face competition from the likes of the Xiaomi Redmi Note 5, and Asus Zenfone Max Pro M1 among others.

Frankly, this looks almost identical to the recently launched Oppo A5. All things considered, the Realme 2 offers a handful of upgrades over its predecessor in exchange for a modest price bump – the Realme 1’s launch price was INR 8,990 ($128).