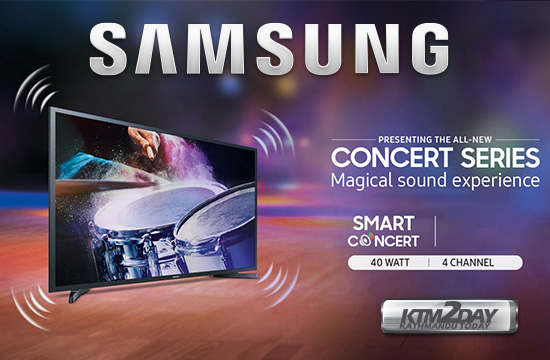 Him Electronics, the authorized distrubutor of Samsung consumer electronics in Nepal has launched the latest “Concert Series” smart televisions in Nepali market.

Samsung is one of the market leaders in the TV segment and the Korean technology giant is not just focusing on the premium category UHD TV’s but has also introduced a new Concert series , a ‘Make for India’ innovation.

Samsung claims to have conducted an extensive consumer research that suggests consumers need more than just a TV for their living room.

Focusing on the consumers’ need for immersive and quality sound, Samsung’s Concert series will have four speakers embedded, instead of the regular two.

Unlike regular TVs, it will have two at the top and two at the bottom. Each channel is said to deliver 10W sound output to pack a total output of 40W surround sound experience.

Smart Concert will feature Bluetooth capability to pair with smartphones or speakers and a customizable advanced user interface.

There will be a Smart Hub feature which will allow users to access Live TV and browse content across a host of apps such as Netflix, Amazon Prime, Big Flix and many more.