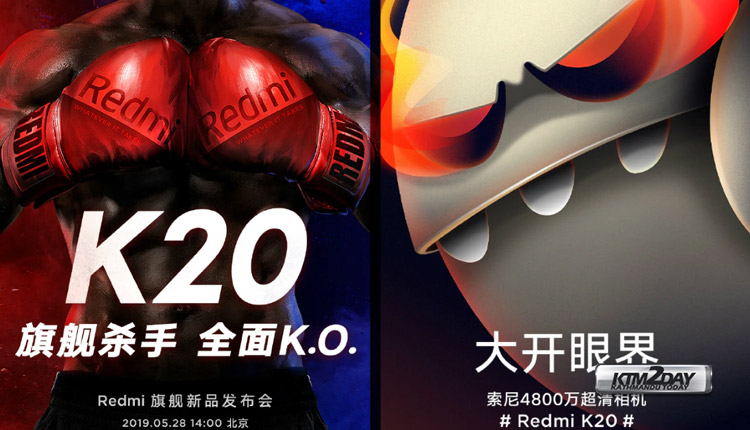 The much anticipated launch of Redmi K20 Series of phones has now been officially confirmed by the company which is set for May 28.

India’s Xiaomi head Manu Kumar Jain has confirmed the devices to soon reach Indian markets after its formal launch on mainland and also additionally declared that the Indian variant will come powered by a Snapdragon 855 processors.

Xiaomi has been long teasing the new K20 devices as the next Flagship Killer 2.0 phones and will go head to head against expensive handsets like recently launched Oneplus 7 Pro and the Samsung Galaxy S10 series.

The launch event is going to take place on May 28 at 2 PM local time which will be broadcasted from various social media sites.

Through several sources and leaks the Redmi K20 series phones has all of its specifications revealed upto this point of time. The company has also been releasing teasers about its upcoming devices through the official channel.

On the rear panel, the phone will include a 48MP primary camera with f/1.7 aperture, a 13MP secondary camera with f/2.4 aperture, and third will an 8MP with f/2.4 aperture reveals the leaked specs sheet. A new leak suggests that the Redmi K20 Pro will come packed with 48MP Sony IMX586 camera and 960fps slow-motion recording support. The 13MP and 8MP will be ultra-wide and telephoto cameras, respectively. The specs sheet further notes that the Redmi K20 like the Redmi Note 7 series of phones will include 4000mAh battery. However, the flagship killer is expected to come with a 27W quick charge adapter in the box.

Interestingly, in AnTuTu the Redmi K20 flagship killer manages to score as high as 458,754, Redmi President Lu Weibing announced. It must be noted that most flagships powered by Snapdragon 855 have achieved AnTuTu score of up to 400k. Xiaomi latest flagship aka Mi 9 is currently one of the best scoring flagships on AnTuTu. The Mi 9 scores 370,00 on an average on AnTuTu benchmark site.