Alongside the iPhone XS, iPhone XS Max, and iPhone XR, Apple used the special event at the Steve Jobs Theatre in Cupertino earlier this week to unveil the Apple Watch Series 4. The launch represents the biggest redesign to Apple’s smartwatch since its introduction in 2015. Not only does the Apple Watch Series 4 come with a case that’s noticeably thinner, but Apple has also refreshed the materials used.

More significantly, though, the Apple Watch Series 4 comes with displays that are 30 percent bigger than before. This is partially down to 40mm and 44mm sizes that the new watches will be available in, up from 38mm and 42mm that we had seen in all Apple Watch models launched till date. We had a chance to spend some time with the 44mm variant of the Apple Watch Series 4 right after the launch event, and our very first takeaway was that the new model, while bigger, didn’t look as chunky as some of the other smartwatches like the Samsung Galaxy Watch. The iPhone X-inspired corners are more rounded than before and they make sure that despite its bigger size the watch doesn’t look as ‘boxy’ as before. The ceramic and sapphire crystal back felt nicer than our Series 3 Watch, but we didn’t spend enough time the new watch to comment on its overall fit and comfort in the long run. The Digital Crown now includes haptic feedback, which also felt like a nice touch. The LTE variant now sports a red ring along the edges of the crown, instead of the giant red dot on the Series 3, though we still don’t understand why this design element exists at all.

The Apple Watch Series 4 comes with watch faces that have been redesigned to utilise the additional real estate on offer and some of them — like the Infograph watch face pictured above —will let you put more complications on the screen than ever before. There’s a new Modular Infograph watch face with, among other things, a new kind of complication that can be used for stuff like score sand stock updates. The new watch faces will give some much-needed choices to Apple Watch owners, though an Apple representative confirmed that these watch faces will not be available for older Apple Watch models. The Apple Watch Series 4 feature that grabbed the biggest headlines was the ability to perform an ECG by just placing your finger on the Digital Crown. Unfortunately, this feature wasn’t being demoed at the hands on area, as it will be made available in the US via a software update that will ship on an unspecified date. It should roll out in other countries as and when Apple gets regulatory approval from the local bodies. 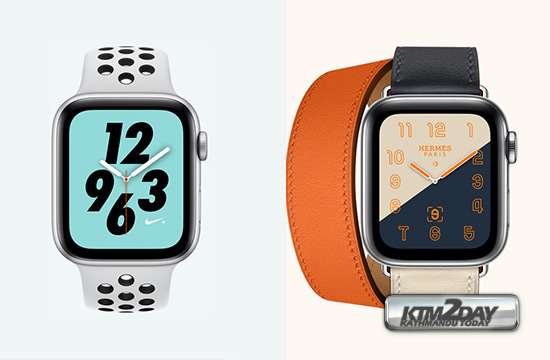 As you would expect, the Watch also comes with a host of other improvements like enhanced cellular reception — made possible by the ceramic and sapphire crystal back — a processor that’s up to two times faster than the one in the Series 3 watch, second-generation optical heart sensor, improved accelerometer and gyroscope that enable fall detection, Bluetooth 5.0 support, and 16GB storage standard on both GPS and GPS+Cellular models. Just like the iPhone XS and iPhone XS Max, the Series 4 Apple Watch will also be available in a new Gold colour option.

While Apple hasn’t officially announced the price and release date of the Apple Watch Series 4, but we have speculated that the new range will start retailing at Rs. 70,900. Stay tuned to get details related to the watch’s launch date and pricing in Nepali market.