After Apple yesterday introduced the world’s first processor with 5nm lithography – A14 Bionic, smartphone manufacturers on the Android platform have also started to gather pace. Yesterday it was also revealed that Samsung will produce the new Qualcomm Snapdragon 875, which will also be manufactured using 5nm lithography.

The Snapdragon 875 is Qualcomm’s 5G AP chip for premium smartphones and is scheduled to come out in December. Samsung Electronics’ Galaxy S21 (tentative name) and high-end phones of China’s Xiaomi and Oppo will be powered by the new Qualcomm AP.

Now, through his official account on the Chinese social network Weibo, Lu Weibing – Vice President of Xiaomi – has left hints of the next Redmi smartphone which will be equipped with this processor. It is true that the VP ended up not mentioning names, but considering the usual timeline of the brand, everything indicates that it will be the Redmi K40 Pro. 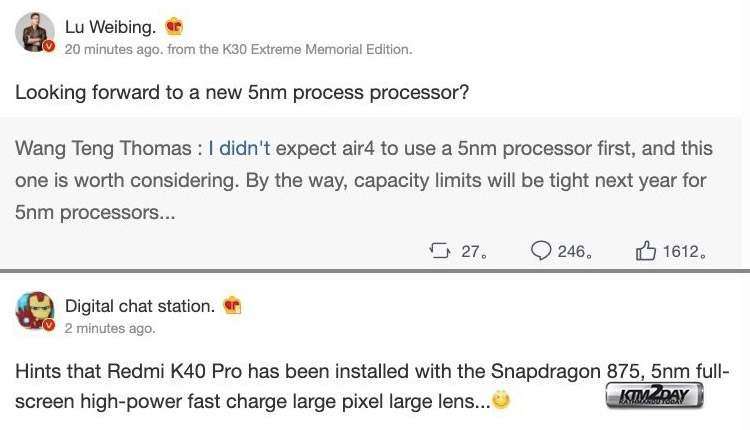 It is expected that both brands (Xiaomi and Redmi) will continue to follow the same strategy, increasingly presenting themselves as two forces to consider in the various segments, instead of Redmi being just a “cheaper version” of Xiaomi.

When will the first Xiaomi flagship phones arrive in 2021

Even though there was no information to confirm the launch dates for 2021 , the brands’ history allows us to speculate when this might happen with some certainty.

As happened this year, it is expected that in 2021 Xiaomi will present the alleged Xiaomi Mi 20 before the Spring Festival in China, which will take place in February. Redmi, on the other hand, should also maintain its tradition and launch the Redmi K40 and K40 Pro the following month, in March.

Therefore, it is being speculated that Xiaomi might launch at least two smartphones equipped with the new Qualcomm Snapdragon 875 processor during the first quarter of 2021.