Home » Xiaomi Mi A2 review: Bang for the buck

Xiaomi Mi A2 review: Bang for the buck

You can’t argue against cold, hard facts. You simply can’t and the fact remains that what Xiaomi has done in the Indian smartphone market is nothing short of remarkable. Less than four years ago, this was a brand whose name couldn’t be pronounced and it read like a great word for a game of Scrabble. But with competent smartphones and a killer pricing strategy, Xiaomi has gone from strength to strength. While one can’t argue against facts, perception is a totally different beast.

Perceptions are hard to change and the perception about Xiaomi is that it can’t make good phones that cost more. And when we say cost more we mean phones that are north of NRs.24,000. We saw it with the Mi Mix 2 last year and it didn’t really set the market on fire.

Last year, Xiaomi partnered with Google to launch the Mi A1 smartphone, which was the first device from the Chinese smartphone maker to not run on its native MIUI custom ROM, but a stock Android operating system. While that device was far from perfect, it was an ideal buy for those looking for a pure Android experience, with promise of build quality at an affordable price.

Almost one year after that, Xiaomi has launched its successor, the Mi A2 smartphone, in India today. The handsets offers a lot on paper – full HD+ display, Qualcomm Snapdragon 660 processor, 20MP front camera and 20+12MP rear camera setup — all of that at a price of INR 16,999(NRs.27,200). While this isn’t exactly an ‘expensive’ phone per se, Xiaomi has stepped out of its comfort zone with Android One.

But offering competitive specs is just half the battle. It takes more than that for a smartphone to be your next buy. We played with the Xiaomi Mi A2 to find out whether it should be your next buy or not and here is our review: 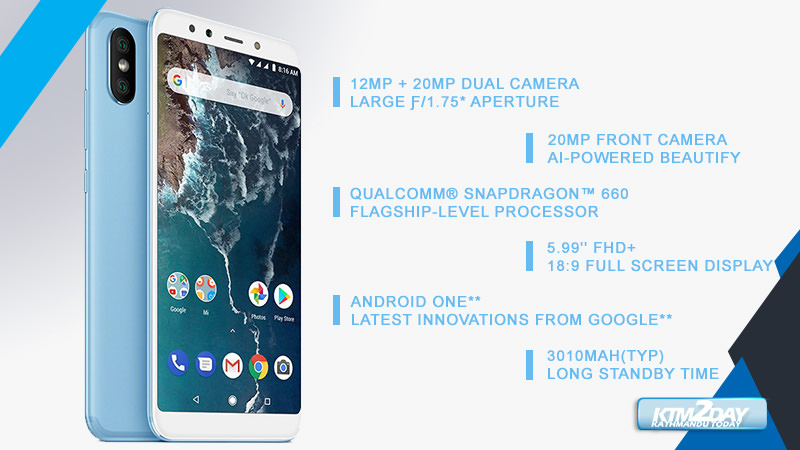 Design
With a metallic unibody design, chamfered edges and matte finish back panel, Xiaomi’s Mi A2 joins the rest of the Mi clan smartphones as it too is a high-quality finesse smartphone. But that doesn’t mean it is perfect.

After the Redmi Note 5 Pro and the Redmi Y2, the Mi A1 is the third handset from Xiaomi to come with the unpleasantly disproportioned protruding dual rear camera setup, that makes your handset unstable and wobbly when placed on the back on a flat surface.

Both Asus and Honor have managed to push in their dual cameras within the surface of their handsets but Xiaomi hasn’t been able to do with any of their devices till now. For the record, the Mi A2 cameras are more obtruding than the recently launched Redmi Y2. With the Redmi Y2, Xiaomi had made the dual rear camera setup jut out slightly less.

We recommend that you make use of the cover that the company gives you with the device in the box as that makes the unsteadiness less painful.

Besides the cameras, the back panel also houses the centrally placed fingerprint sensor and the Mi and Android One branding below it.

The antennas lines on the Mi A2 run along the top and bottom edges of the device are similar to what we saw in the Xiaomi Mi A1.

Turn the handset around and you see a symmetrically placed bottom and top bezel, which means that they are of the same size, even though the bottom bezel doesn’t serve any purpose. The top bezel houses the earpiece, front camera, ambient light and proximity sensors. 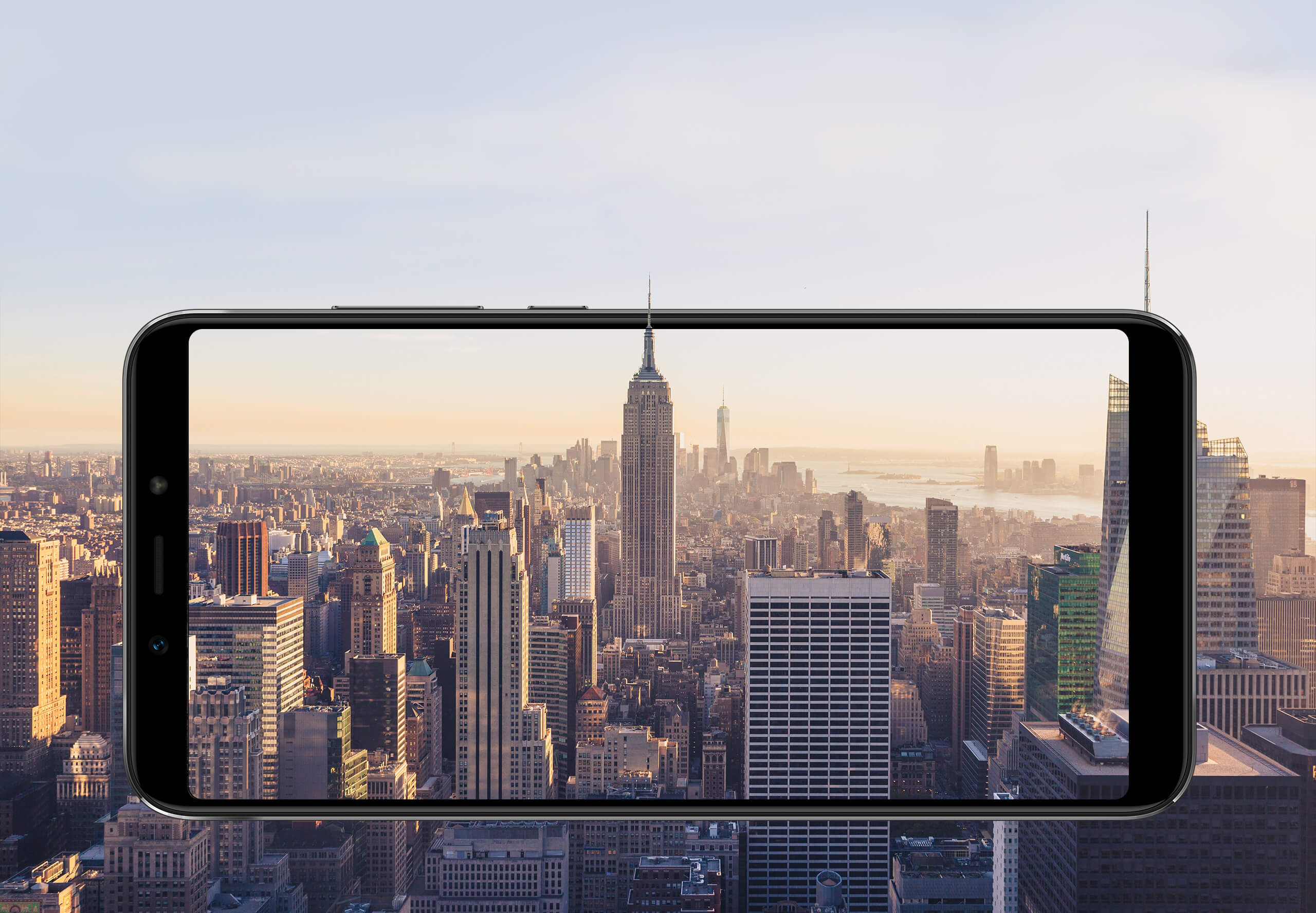 The handset houses the volume rocker and power button on the right and the SIM card tray on the left. The top of smartphone has the IR blaster that lets it control devices such as a TV and the bottom edge comes with a speaker grille at the bottom, along with a USB Type-C.

If you are thinking we forgot to mention the headphone jack, it’s not us but the company. Yes, Xiaomi has ditched the 3.5mm jack with the Mi A2, making this the second device from the company in India to skip it (Last year’s Xiaomi Mi Mix 2 too didn’t come with one). Now Xiaomi is not the first one to do it. Some of the biggest handset makers of the world don’t feel the need to give it in their handsets, but for a company that pioneers in selling the handsets that are supposed to have mass appeal, this move from Xiaomi certainly doesn’t get our approval.

While using the phone, you have to ensure you do not lose your 3.5mm jack to USB Type-C connector in case you use wired headphones or you need to switch to Bluetooth ear plug with the Mi A2.

Even with the missing headphone jack, the Mi A2 remains as thick as the Mi A1 at 7.3mm.

Like most other full screen handsets, the Mi A2 too has on-screen navigation key that hide while operating a full screen app but appear as soon as you tap on the screen.

During our testing we found that the adaptive display of the handset tends to be a bit off from the surroundings. When adaptive-brightness is turned on, the brightness level becomes dimmer than what it should be.

Therefore, we couldn’t rely on it and had to turn it off. The sunlight legibility is also merely satisfactory. You get a Night Light feature in the display settings of the Mi A2 that can be set at a particular time of the day. It turns your screen amber and is said to make it easier to look at the screen or read in dim light.

Performance
When it comes to the Mi A2, software is certainly the highlight. As it is part of the Android One programme, it runs on Android 8.1.0 Oreo out-of-the-box and received the August security patch update already during the time we were testing it. Stock Android ensures that there is no bloatware and gives pure Android experience and regular OS updates.

It comes powered by Qualcomm’s Snapdragon 660, the mid-range smartphone processor also seen on Nokia 7 Plus and Vivo X21.

As of now Xiaomi has only launched the 4GB RAM and 64GB internal storage variant in the country — that too which doesn’t support a microSD card. Hence you have no option but to make use of the limited storage. Good thing is that being an Android One handset, you get unlimited high-quality photo storage for free from Google Photos so it solves the storage crisis by a little bit.

You do get dual-SIM support, however, when using two SIM cards, one will support 4G while the other will not, which is a bummer as you end up toggling between which SIM should you use for data. And if you are one of those who uses a NTC SIM along with a Ncell SIM, you will either not be able to use the 4G speed of the secondary SIM or not be able to use the secondary SIM at all.

During our testing, we found the overall performance of the Xiaomi Mi A2 to be smooth. The phone handled multi-tasking of random apps in a smooth lag-free way. We did not encounter any frame freezing of any kind. Both the call quality and the audio quality are also satisfactory.

We did find the Mi A2 getting warm when we put it through an extensive work including downloading heavy files, transferring WhatsApp backup data. Another problem we faced was with the proximity sensor, as occasionally during a call, the display got active and there were unwanted commands such as opening of dialler app and turning on of the loudspeaker.

Camera
Being touted as the “Picture Perfect” smartphone, Mi A2 certainly has a lot to offer in the camera department.

The camera app is pretty simple and standard Xiaomi with options to make a video, a short video (it is pre-set to 10 seconds), capture a picture in square mode, portrait mode, panorama and manual mode. It also has native Instagram-like filters for the users.


As per Xiaomi, low-light photos are brighter with the 20 MP lens and 4-in-1 Super Pixel, based on pixel binning technology. For that, one has to go to the Manual mode and select the “Low Light” in the Lens option and we did see that this was true for the images we clicked. The images captured in low light lens were much brighter than the regular lens, so you’ll have to make this switch every time you are in a dimly-lit room to get the best results.

Besides that, shots in natural light turned out to be pretty neat, but the indoor lighting shots were reasonable. The Bokeh effect was accurate in both the selfie and the rear cameras. Like other Xiaomi phones, the beautification feature on the Mi A2 is also subtle and looks realistic, which we really like as other smartphone makers just over do the whole beautification bit.

Overall, camera is one of the good parts of the Mi A2 and you will not be disappointed with it. It certainly has an upper hand in well-lit or natural lighting conditions.

Battery
When it comes to battery, the Mi A2 is backed by a 3010mAh battery. In our experience, the battery of the smartphone lasted easily about a day with moderate usage. This involves routine tasks, as well as GPS tracking, watching Netflix content and more. For a heavy-duty user, it may not last that long. The handset is said to come with Qualcomm Quick Charge 4.0 for fast-charging support, but unfortunately, the charger that you get in the box is not a fast charger. Therefore, you will not be able to use this fast-charging feature if you don’t separately buy a fast charger.

The company has been pretty vocal about catering to the needs for all those for whom every Rs 500 matters when it comes to purchasing a handset.

At this price, Xiaomi offers a well-performing mid-range processor, solid camera performance and stock Android experience — which is hard to find in competition at this price.

Just make sure that if you use the wired headphones, carry the connector and put a cover to get rid of uneven back and you’ll be set.