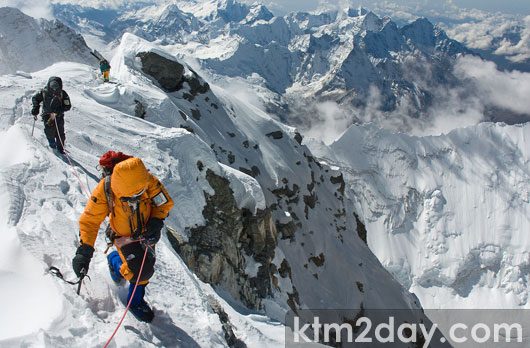 The team headed for the rope-fixing task and reached the summit of Mt. Everest at 11:40 am.

“As per the information, three Sherpas each from Sherpa Shangri La Treks and Expedition, Mountain Experience Pvt. Ltd and Beyul Adventure Pvt. Ltd reached the summit with the rope-fixing task, said Baburam Bhandari, under secretary at Tourism Industry Division, Ministry of Tourism and Civil Aviation.

“With the Sherpas finishing the rope-fixing work, numbers of climbers are set ready to summit the Everest as soon as a weather condition becomes favorable,” said Jiban Ghimire managing director Sherpa Shangri-La Treks & Expeditions. He said that the expedition would probably start from May 15-16. This spring 82 mountaineering expeditions have received permits to make an attempt on different Himalayan peaks compared to 99 teams last year.

Among the applicants, 233 mountaineers of 25 expeditions have received permits to attempt on Mt. Everest. Last year, 27 expeditions had applied for the peak.

Chewang Nima Sherpa, a close contender against Apa Sherpa is attempting the Mt. Everest ascent twice in a single season this spring in a bid to equal the record set by Apa.

Following Apa who has climbed Everst for 19 times, Chewang, who climbed Mt. Everest for the 17th time last year, on Wednesday notched up his record at 18 successful bids. On May 16, Chewang will make his second ascend to the Everest to score the equaliser to Apa’s record, Ghimire said.

Chewang ascended Mt Everest on Wednesday morning as a guide of Alpine Ascents International 2010 Everest Expedition for the rope-fixing work. He was accompanied by eight other Sherpa guides. (PR)