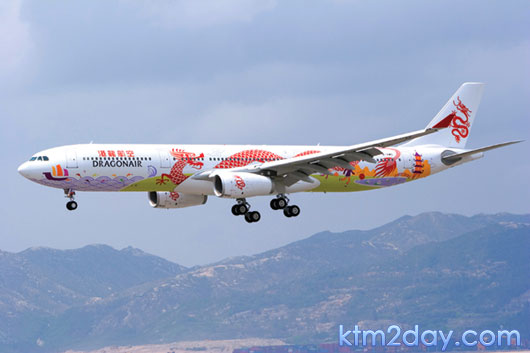 Dragonair, a wholly owned subsidiary of Cathay Pacific, is planning to double its flight frequencies to Nepal from September this year.

At present, the Hong Kong-based carrier is flying three times a week on the Hong Kong-Dhaka-Kathmandu sector using an Airbus A330.

“Considering the growing market prospects, we are working out plans to increase our weekly flight frequencies to six from September,” said Tom Wright, General Manager of Dragonair for India, Middle East, Pakistan, Bangladesh and Nepal.

Tom said that the year 2010 has begun with a positive note for Dragonair and its sister airline Cathay Pacific. The airline made a profit of HK$ 4,694 million in 2009 as compared to a loss of HK$ 8,696 million the previous year.

Presenting awards to top performing passenger and cargo agents in Nepal at a function organised in the capital on Friday, he hoped that 2011 will be a more favourable year for the airline. The agents were awarded for their contributions to the success of the airline’s business in 2009.

He said that the carrier is committed to supporting the Nepal Tourism Year 2011. “We will be increasing the number of inbound tours to Nepal via Hong Kong using an extensive network of Dragonair and Cathay Pacific,” he said.

In October last year, the airline increased its flights to five from three and introduced the A330 aircraft, which offers greater capacity for passengers and cargo. The carrier, however, reduced its services to three flights a week during the summer season.