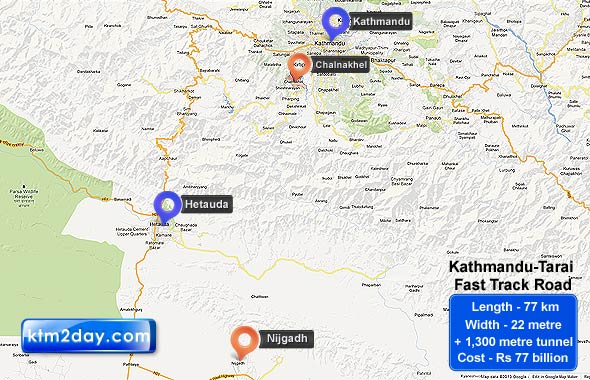 The Kathmandu-Tarai Frast Track Road’s track opening work from Chalnakhel (Lalitpur) to Nijgadh (Bara) has finally completed. The project completed the last remaining job—cutting through the cliffs along Ipa VDC-2—on Saturday.
The entire track opening of this national pride project will be completed once the row over land acquisition in Khokana, Lalitpur, settles.
Nepal Army (NA) personnel were deployed round the clock with a target to complete the track opening by March 10 (the Nepal Army Day or Maha Shivaratri). The Directorate of Development and Military Engineering Service of
the NA had also directed the NA personnel to complete the work on the prescribed date. “Now, there is access to a direct road network from Chalnakhel to Nijgadh,” said Bhagawan Karki, Battalion Commander of Bikash Nirmaan Karyadal 1.
The NA, after getting the authority for the track opening from the government, completed the job (Chalnakhel-Nijgadh section) in 39 months. According to an NA official, construction was delayed due to problems related to land confiscation and compensation issues. A total of 700 NA personal had been deployed for carrying out the job, setting up camps in 10 locations between Sisneri and Nijgadh, where the road ends. Locations where the work was left included Ipa VDC-2 (around 200m in Ipaveer), Gadhi VDC-1 (100m in Badar Khola), Chhatiwan VDC-4 (700m in Adheri and Aapdamar). All the locations fall in Makawanpur district.
With the track opening,light vehicles can now be operated along the road. About a month ago, travelers had to get off the vehicles at two locations along the road due to the cliffs. “There is no need to walk along the Chalnakhel-Nigjadh segment now,” said a senior NA official. The track opening of the 76-km road was commenced by the NA in November 2009. For the purpose, the government disbursed Rs 250 million in the first year, Rs 270 million in the second year and Rs 160 million in the last fiscal year. Similarly, Rs 140 million has been allocated for the current fiscal year.
An official at the Ministry of Physical Planning, Works and Transport Management said they were also doing final preparation to start work on acquiring land on the Khokhana section. “After we issue a public notice on land acquisition and provide compensation, track opening in Khokhana can be completed within a week,” said the official.