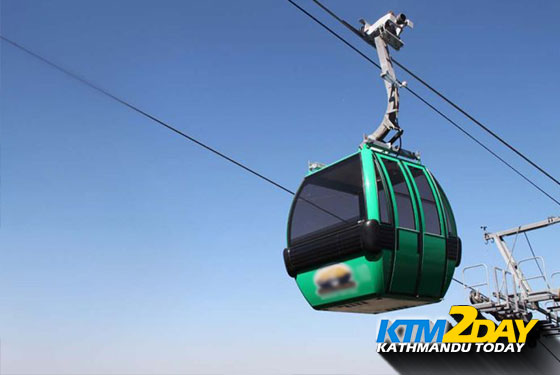 The Ministry of Physical Infrastructure and Transport has given a go-ahead to the Siddheswar Tourism Cooperatives to construct a 2.9-km mono cable car connecting Phulchoki hill and Godawari.

Another 2.4-km cable car project connecting Thankot with Chandragiri hill is also scheduled to commence from April 2015. Government officials said these projects are expected to give a big boost to the tourism sector.

The proposed Phulchoki-Godawari cable car will be constructed with an investment of Rs 1.41 billion, according to the cooperatives. Work on the project is expected to start by this year. Phulchoki is one of the popular tourist spots.

Jaganath Ghimire, joint-secretary at the ministry, said the ministry recently approved the cooperative’s plan. “The cooperative will itself complete the processes related to land acquisition from the Forest Ministry,” he said.

Ravi Acharya, secretary at the cooperatives, said the project was initiated, realising the domestic tourism potential. The Godawari Botanical Garden — the starting point of the proposed cable car — alone receives footfalls of around 360,000 domestic visitors annually. The starting point is located at 1,530m and the destination is at 2,620m from the sea level.

The cooperatives will inject 50 percent financing in the project, while banks will finance the rest. The cooperatives, which plans to borrow loans from Civil Bank and Sunrise Bank, also plans to operate a park and a resort on Phulchoki hill.

Of the three cable car projects in the valley, on which the Tourism Ministry had conducted a pre-investment feasibility study, two are being undertaken by the private sector. The three projects are Thankot-Chandragiri, Godawari-Phulchoki and Budhanilkantha-Shivapuri.

Chandra Prasad Dhakal, executive chairman of International Money Express (IME), and an investor of the Thankot-Chandragiri project, said the project is expected to come into commercial operation by April 2015. “Construction work on the Rs 2.15-billion project is going in full swing,” he said.

The project also includes construction of 150-bed resort, view tower, and refurbishment of temples in the region. The project has leased around 800 ropanies land to provide different leisure activities to visitors. “As there are no enough places for the valley denizens to spend leisure time, our project is mainly targeted at them, besides the tourists,” Dhakal added.

The government has also planned a number of cable car projects outside the valley. It plans to build a 1.5-km cable car connecting Phewa Lake and the World Peace Stupa, Pumdi Bhumdi in Pokhara.

The project, according to government officials, is estimated to cost more than Rs 1.2 billion, excluding land acquisition costs. The government has invited requests for proposal to develop and manage the long-planned cable car service in Pokhara under the build-operate-transfer model.

The Tourism Ministry is also planning to construct two cable cars in Taplegunj and Pyuthan under the Public Private Partnership (PPP) model. Pathibhara in the Eastern region is popular for the Pathibhara Devi temple. It is located 3,800 meters above the sea level.

Apart from Nepalis, it also attracts a large number of visitors from Bhutan and Sikkim and Darjeeling of India. Besides, a magnificent view of the Kanchanjunga Range is the place’s major attraction.

According to a pre-feasibility study conducted by the government, the planned cable car from Mathilo Phedi to Pathibhara stretches 3km and is expected to cost around Rs 700 million (excluding land acquisition costs).

Swargadwari in the Western region is popular for a hilltop temple, which is named among Nepal’s top pilgrimage sites and is listed on the national inventory of cultural and historic heritage sites.