Tribhuvan International Airport to get $ 28 million for runway fixes 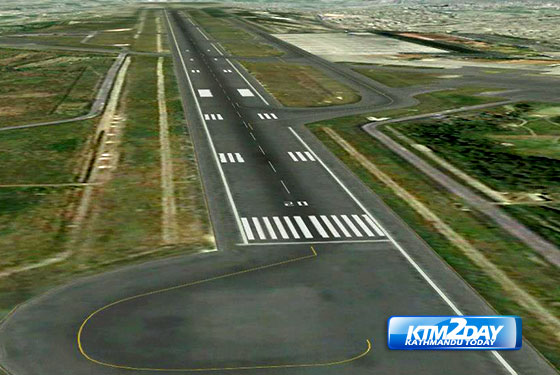 The Civil Aviation Authority of Nepal (CAAN) plans to rehabilitate the runway at Kathmandu’s Tribhuvan International Airport (TIA) as it has been affecting smooth operation of aircraft due to repeated occurrences of cracks in the pavement.

CAAN’s board has directed the management to proceed with the project only after settling an ongoing probe into alleged irregularities concerning the construction of a helipad and overlaying runways. CAAN has allocated $ 28 million to begin improvement work on the 3,050-m runway this year.

In July 2011, the parliamentary Public Accounts Committee (PAC) had asked the Commission for the Investigation of Abuse of Authority (CIAA) to probe irregularities and punish those involved after the newly-built helipad at TIA crumbled only four months after its construction and the runway overlay caved in. The helipad cost Rs 27 million and the runway overlay cost Rs 240 million.

Three years have passed but the investigation has not reached a conclusion. Tourism Ministry officials suspect that the file concerning the irregularities might have been suppressed. Since the CAAN board has ordered that work be started only after the case is closed, the runway improvement project may not happen.

A Caan board member who asked to be unnamed said that the CIAA probe had not been completed and that it would be against the law to issue a tender for the runway’s reconstruction. A recent report of Ayesa Ingenieria of Spain has concluded that the runway at TIA is not strong enough to handle wide-body aircraft due to its ageing asphalt foundation, and distress is caused to the upper surface instantly when heavy jets land. The damage to the lower asphalt layers is reflected quickly in the upper surface resulting in cracks and other damage to the runway.

The study report has suggested that the lower layers of the runway be dug up and the foundation repaved by removing damaged asphalt layers and substituting them with a new base and surface courses. Repeated occurrences of cracks on the runway at the country’s sole international aerial gateway have been affecting smooth operation of aircraft since 2011. Scores of flights have been diverted or delayed in recent years due to problems in the runway. Trouble mainly occurs during the rainy season.

The report said that when compared to the core part of the runway between 2006 and 2013, damage to the intermediate layers was caused by the operation of large jets like the Airbus A330 and Boeing 777.

Cracks first appeared on the runway in June 2011, and they have become a recurrent problem now. Cracks were reported occasionally in 2012. However, the problem worsened in 2013, forcing Caan to take a harsh decision to bar wide-body aircraft from landing at TIA for a month.

In August last year, Caan had requested international carriers serving Kathmandu to use smaller aircraft or restrict their load to 196 tonnes in a bid to prevent further damage to the runway.