Automobile enthusiasts will have a hard time choosing which car to buy as the Nepali market is set to see baffling surprises in various segments in the second half of 2016.

Dealers of renowned brands like Volkswagen, Suzuki and Ford, among others, have been getting ready to roll out various models in the compact sedan, sports utility and commercial-cum-off-road segments. Also coming up is a new rendition of the classic American ‘pony car’.

CG Moto Corp, the authorised dealer of Suzuki four-wheelers in Nepal, is set to launch a sporty SUV, the Vitara Brezza, within a month, company officials said. The Vitara Brezza will rev up the competition in the fastest growing automobile segment in Nepal.

The Vitara Brezza is powered by a 1,248 cc diesel engine that churns out 88.5 bhp and 200 Nm of torque. The car features a smart play infotainment system with Apple Car Play, cruise control and anti-pinch guard power window.

“The Brezza is an ideal vehicle to compete in the SUV segment as it is one of the strongest vehicles with an excellent engine,” said Karan Chaudhary, executive director of CG Motocorp. “Moreover, the vehicle will move the competition in the SUV segment to a completely different level.” Other features include dual airbags, ABS, the segment’s first dual color scheme, Suzuki’s innovative TECT system that adds to the safety design, steering mounted control and parking sensor with camera, among others, the dealer said.

Likewise, Pooja International, the authorised distributor of Volkswagen vehicles, has planned to unveil two new additions, the Ameo and the Amarock, in the compact sedan and commercial-cum-off-road segment.

“Volkswagen has adopted the best engineering practices and has been ranked at the top of other global brands,” said Devashish Biswas. “The upcoming vehicles in the Nepali market will also set fine examples when it comes to safety, power and innovation.” The Ameo sedan is powered by a 1.2 litre Multi-Point Injection (MPI) engine which produces 74 bhp at 5,400 rpm, according to the company. The vehicle features driver and co-passenger airbags, reverse parking camera and sensors, anti-pinch windows and anti-lock braking system (ABS). 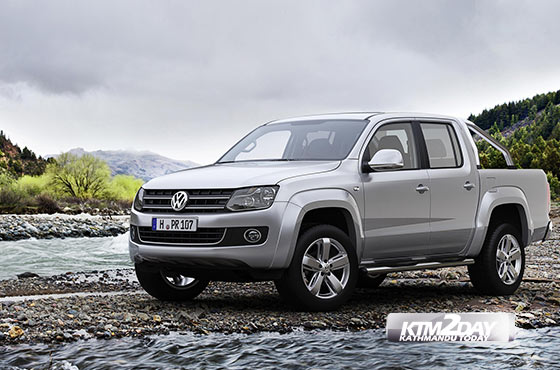 The distributor plans to launch the Volkswagen Amarok either before Dashain or during the NADA Autoshow, said Biswas.

Meanwhile, the Ford Mustang, which was recently launched in the Indian market, will enter Nepal in the upcoming months, company officials said.

The Mustang is a bold new interpretation of the classic American car. According to international media reports, the sports car topped the charts in terms of sales, beating the locally built Porsche 911 in Germany last month.