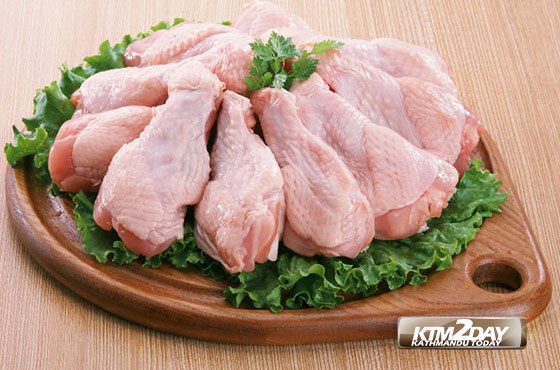 Chicken meat prices have started to drop due to a supply glut caused by the arrival of fresh harvest in the market. According to the Nepal Chicken Sellers Association, the price of poultry meat reached Rs320 per kg on Friday.

Traders said that output had soared 30 percent over the month due to climatic conditions.

Chicken breeding usually speeds up in the summer season, and the mortality rate is lower due to favourable temperatures.
The price had soared to Rs360 per kg in mid-April and dropped to Rs340 in mid-May.

Xiaomi is Nepal’s number one smartphone brand in…

The daily requirement of chicken in the Kathmandu Valley and adjoining districts is 300-350 tonnes. This accounts for 60 percent of the total demand across the country.
Traders said that the first phase local election campaign during April had boosted demand for chicken meat dramatically, causing a short supply in the market.
Accordingly, prices went up, they said. “Another reason for the short supply during April is the production cycle,” said Jung Bahadur BC, president of the association.

“There was a big gap in supply and demand causing prices to spike.”

The market has been corrected now, he said. However, prices are likely to increase as the second phase local election campaign has begun in the eastern, western and southern parts of the country, and shipments will be diverted there, traders said.

Chitwan, Kavre, Hetauda, Nuwakot and Sindhuli are the largest suppliers of chicken to Kathmandu and other key cities.

The poultry industry has an annual turnover of Rs33.72 billion, according to the Central Bureau of Statistics (CBS). The country’s annual production of chicken meat is valued at Rs20.52 billion.

Chickens are produced commercially in 64 districts in the country, and 55,871 people are engaged in the business. According to a CBS survey, 75 percent of commercial chicken producers are making profits.

Chitwan is the largest producer of poultry products in the country, posting an annual turnover of Rs10.17 billion, or almost one-third of the national total.

Traders said that demand for chicken in the Kathmandu Valley had been growing due to a fast swelling middle class.

Supplies, however, have not been able to meet demand. More and more poultry farms are opening, but demand still outstrips supply, said BC.

Xiaomi is Nepal’s number one smartphone brand in 2020-Q1

Imports of medicines at all time high during lockdown period