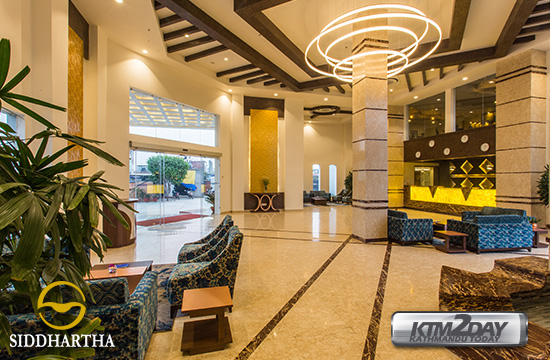 The Hotel Siddhartha View, Nepalgunj, joined the four-star club on Wednesday, bringing the number of four-star hotels in the country to seven. According to Rajesh Kumar Lamsal, a Tourism Department official, the property was awarded a four-star rating on Wednesday after assessing all the required criteria.

There were only two four-star hotels in the Kathmandu Valley until one and a half years ago—Hotel Himalaya and Hotel Shanker. The new entrants to the four-star club are the Hotel Siddhartha View and Cygnett Inn Krishna Hotel in Nepalgunj, Hotel Opera in Mahendranagar, Hotel Ichchha in Simara, and Hotel Mystic Mountain in Nagarkot.

The Soaltee Sibkrim Hotels and Resorts in Nepalgunj had applied for a four-star rating initially, but it reapplied for a five-star rating after the government relaxed requirements for the construction of star hotels outside the Kathmandu Valley in a bid to spread out tourism.

As per the new provision, a five-star hotel can be opened outside the Valley with 80 rooms. Earlier, the minimum number of rooms required was 100.

“We are studying whether the hotel has fulfilled all the criteria to upgrade itself into the five-star category,” said Lamsal. The department is also assessing the Hotel Opera in Mahendranagar which has applied for a five-star rating, he said.

The department has also approved the terms of reference for Hotel Sarowar, Pokhara to conduct an initial environment examination (IEE) before starting construction. The upcoming property has applied for a four-star rating.

The Tourism Department has also conducted a field inspection of The Leaf Nagarkot that has applied to be the first luxury managed villas and resort in the country. The luxury resort is being developed by EpiKurean Hotels & Lifestyle Thailand.

As per the government’s provision, four-star hotels in the Kathmandu Valley are required to have at least 80 rooms, each 230 square feet in size and with an attached bathroom. Moreover, 10 percent of the rooms should be suites, and the lobby should have a capacity to accommodate 40 guests.

Four-star properties should also be equipped with air-conditioning and CCTV, and feature a conference hall, swimming pool, health club, fitness centre, sauna bath, sports facilities and coffee shop. As per the new rules, four-star hotels outside the Kathmandu Valley are required to have at least 60 rooms.

The government has allowed hotels and resorts to import furniture, carpet, kitchen equipment and other industry-specific items during the construction and operation phase by paying the minimum 5 percent customs duty. The Tourism Department will recommend to the Customs Department to provide the privilege after the hotels and resorts apply for it.

Last year, the Tourism Department awarded a five-star rating to the Tiger Palace Resort at Kotihawa, Bhairahawa. The 100-room property, which is the first integrated five-star casino resort in South Asia, was developed by Australian-listed Silver Heritage Group.