Oppo A7 with waterdrop notch and 4230 mAh battery launched Oppo launched the F9 series smartphones in Nepal couple of months , which sold like hot cakes off the shelves and now the company is preparing to launch its latest A7 series.

Oppo seems to have learnt a lesson from Xiaomi here as it has decided to launch its fresh lineup just like the Pocophone F1.

The A7 is set for launch in China on the 13th of November. And shortly thereafter will launch in our Nepali market possibly within November.

There’s nothing overly impressive about the specs – battery aside, it’s a decidedly low-end package – but the price is pegged at NRs. 26,890, or about £125, so you’re very much getting what you pay for.

As far as specifications are concerned, the Oppo A7 will feature 6.2-inch 1520 x 720 HD+ notched display with a 19:9 aspect ratio. The smartphone is powered by the Snapdragon 450 processor with Adreno 506 GPU coupled with 3GB or 4GB of RAM and with 32GB or 64 GB of storage option. Memory will be expandable up to 256GB via micro sd card.

Sensors on board include E-Compass, Light Sensor, Proximity Sensor, G-Sensor and Acceleration Sensor.

The Oppo A7 is expected to be released on November 30 in blue and ambergold colour options following a November 13 launch in China.

You can now pre-order the A7 smartphone in Nepal by visiting the Oppo Store located in New Road.

The company will start the first sales event from Nov 15 from its official showroom located in Pako.

Customers can pre-order this smartphones by paying a small sum of Rs.2000.

The handset apart from waterdrop notch and 4230 mAh battery has nothing interesting other than a specs of a budget smartphone featuring a Snapdragon 450. 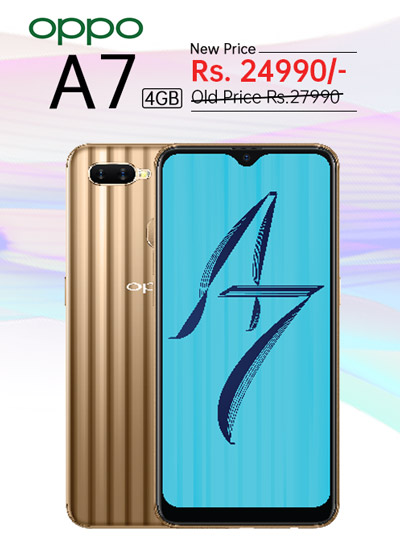