Nepal Airlines to operate flights to Guangzhou from December 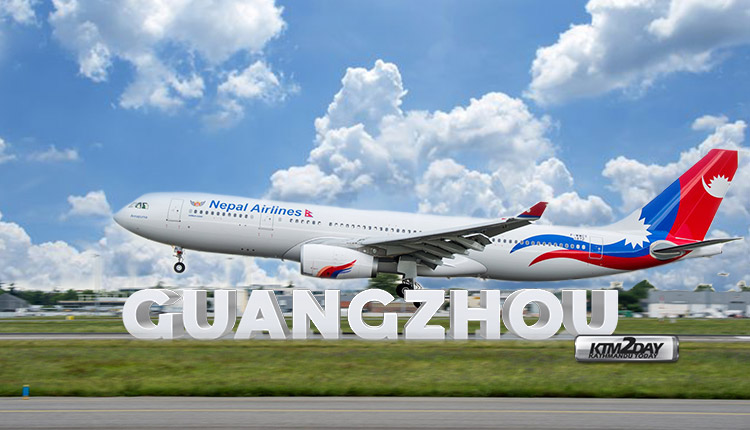 Nepal Airlines Corporation (NAC) is all set to operate flights to Guangzhou of China from the third week of December.

It is almost certain that the national flag-carrier will get permission to operate flight to Guangzhou after long efforts, the Ministry of Culture, Tourism and Civil Aviation stated.

According to the Ministry’s Airlines Industries Management Division, NAC’s operation of flight to Guangzhou has been guaranteed following the bilateral understanding reached in course of the air services agreement inked recently between Nepal and China.

“It is almost certain NAC’s plane will fly to Guangzhou. Most probably, the flights will be operated from mid-December,” an official at the Ministry said.

The Chinese side has put a condition that permission for flight would be issued only after carrying out a safety audit of NAC. It is said that a team of Chinese technicians would arrive in Nepal within November 16 for that purpose.

However, an understanding was reached among the officials of the China Civil Aviation Administration and the civil administration officials of Nepal during the signing of the air service agreement held in China to operate the flights after exchanging the required documents. As per this understanding, NAC internally will send the documents to the Chinese Civil Aviation Administration and it would get the ‘slot’ for operating flights to Guangzhou based on this.

Meanwhile, NAC has started the initiatives for operating flights to the Chinese capital Beijing and Shanghai. It is in touch with the Chinese air regulatory body for this purpose.

NAC’s spokesperson Ganesh Bahadur Chand said that initiatives are underway in that connection. Chand said a team of Chinese technicians will come to Nepal in December to carry out the NAC’s safety audit for the operation of flights to these two destinations.

It is believed the NAC will get permission to operate flights to Beijing and Shanghai also after that.

It may be noted that Himalaya Airlines has already started direct flights to Beijing from October 27. The airlines is also preparing to expand its flights to five more destinations in China.